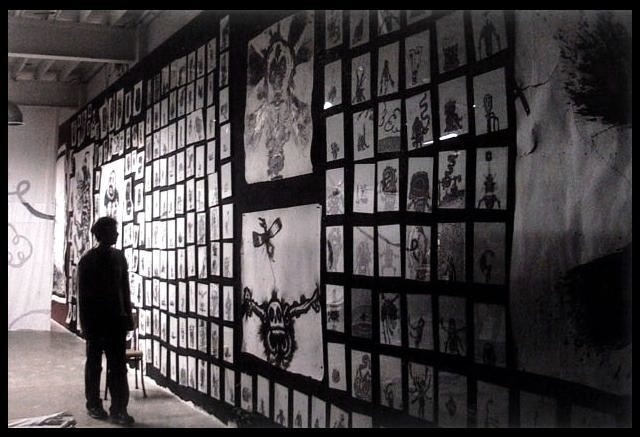 Artwork Drawings Exhibitions! “HEY APATHY!” is an ongoing artistic investigation into monsters, the metropolis, mankind, and existence in general. In the earliest ink drawings (2001) the city is revealed as a ominous gear propelled by an endless sea of faceless denizens. In each subsequent exploration the imagery delves deeper into the city examining the minds and eyes of these unidentifiable crowds. The project deals with interrelated topics such as nature, progress, urban sustainability, war, the ideology of alienation and most importantly the role of the individual amidst a microcosmic global community. In more recent artworks the city remains as a giant gear only now it is all the strange and unique characters, not anonymous cogs, who fuel the machine. The entire project has spanned more than a decade including  gallery installations, street art interventions, storefront performances, pen and ink drawings, giant wall murals, animations, comic books and interactive CG art. Since 2002 ‘HEY APATHY!” has been showcased annually in various exhibitions including presentations sponsored  by the Canada Council for the Arts, the Ontario Arts Council, the Toronto Arts Council,the Toronto Outdoor Art Festival,  Nuit Blanche, the A.G.O. (the Art Gallery of Ontario) and the Hudson’s Bay Company.

2005 Pen and Ink Drawing –installation of works based on New York City, OCAD

In addition to the traditional gallery setting I  also use comic book conventions, outdoor art festivals and street art interventions to exhibit my artwork drawings. I really enjoy these types of venues because I get to meet face to face with all sorts of people. A lot of my work and inspiration comes from the random conversations and interactions that can only happen outside of the gallery environment (in the real world).