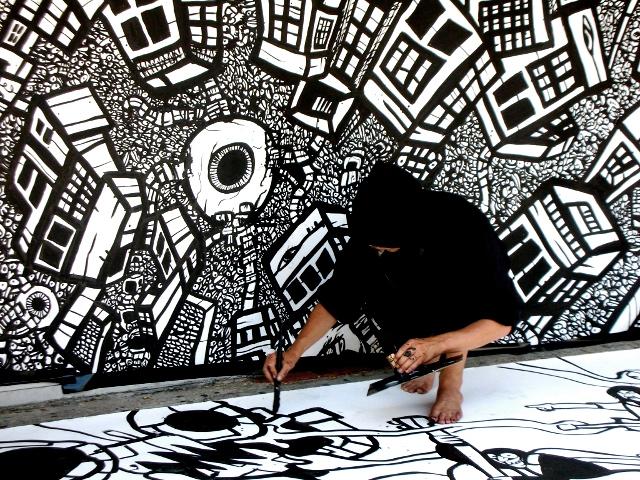 GRAFFITI STREET ART! People, Monsters, Villians and Machines attempt to coexist amisdt the concrete jungle known as the City of Gears!!! For the better part of a five year period I spent my time sitting in the middle of the downtown sidewalks drawing, observing and interviewing the city. In pursuit of some strange edification I chose to immerse myself in metropolis routines and as a result I learned many things about architecture and others.

Like many of us I grew up an avid scribbler and fan of mainstream comics, film, music and animation. As I approached adulthood however, I found myself increasingly infuriated by the repetitious scenarios and apathetic consumerist undertones of both popular and real time culture. At the age of 24, after being commissioned to illustrate a cartoon styled advertisement for alcohol, I had finally had enough and decided to lock myself inside a basement studio to meditate. I spent an entire year down there creating pen and ink drawings depicting the metropolis as an ominous gear propelled by an endless sea of faceless denizens. Following my retreat, and the subsequent exhibition of the works (2002),  I realized that my nihilistic landscapes, although somewhat accurately constructed, were too withdrawn and posed more questions than they offered answers, “Who are all these people?”, “What is the City?” and ultimately “Where do I fit in?”.

In hopes of gaining a better understanding of the phenomena in question I chose to forsake the introspective nature of the artist’s studio in favor of an investigative approach. I proceeded to develop a particular process using public interventions, street performances and outdoor festivals transforming the city into a studio, stage and gallery. Through these immersive experimentations I was able to meet face to face with thousands of people from all over the world and of all walks of life. As a result both my artworks and self evolved immensely. Although I continued to depict the city as a giant gear, it was now all the unique characters, not anonymous crowds, who fuelled the machine. In congruence with these anthropological discoveries my aesthetic processes also change as became primarily concerned with developing a dialogue that could be simultaneously intellectually provocative as well as accessible to audiences of all ages. The pages catalogued in this Graffiti Street Art section feature the various public experiments I made during my journey from the outskirts to the eye of the city.