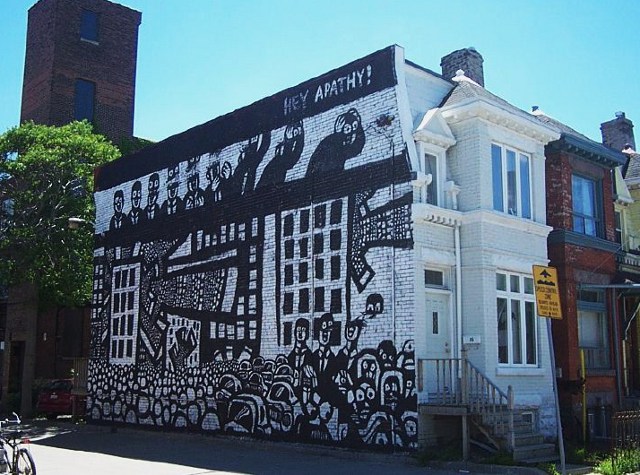 DRAW GRAFFITI! The oversized interpretations of the HEY APATHY! artworks plays a dynamic role in my quest to initiate a dialogue with the city. The murals have been commissioned as private and corporate wall paintings, storefront and store ceiling displays, and for the exterior wall of an entire house. The works have also been featured in numerous fashion magazines, news articles and feature films.

HEY APATHY GRAFFITI MURALS! A BUSINESSMAN’S HEAD SPONTANEOUSLY SPLITS IN TWO AND FLOATS AWAY! LUCKILY THIS INDIVIDUAL HAS ENOUGH SENSE TO REACH UP AND PUT THE TOP BACK IN PLACE! Inspired by the manifestation of communicative prowess expressed in the barrage of images, advertisements, and billboards (in particular), throughout the monstrous metropolis, the “HEY APATHY!” artworks have included numerous black and white public and private wall paintings. The works have included paintings on construction hoardings,as storefront displays, and on giant brick walls.

My first murals were created with chalk tempera on the sidewalk patio in front of the Ontario College of Art and Design. Through these early experiments I developed a suitable technique for creating large works quickly and discovered the hypnotically empowered influence of outdoor artworks and exhibitions. Shortly thereafter I took to painting renegade murals in which Creepy Roach Monsters haunted  hoardings and alleyways around Toronto's Kensington Market and Chinatown. The midnight missions proved exhilarating and productive as the city was transformed into an endlessly imaginative canvas for my black and white creatures.