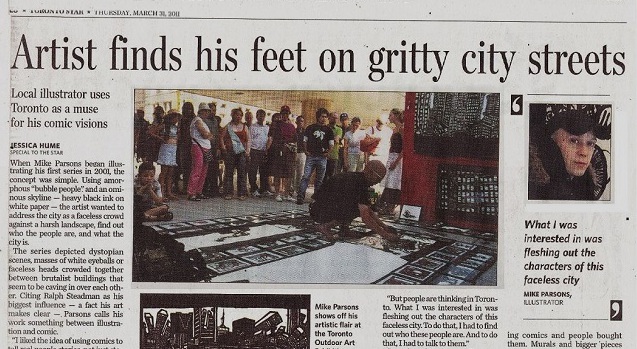 THE THINGS THAT PASS FOR NEWS THESE DAYS...

Mike Parsons Artist Press & Reviews: The “HEY APATHY!” comic book drawings have received a fair amount of attention from various newspapers, published magazines and online articles including stories in the Toronto Star, The Globe & Mail, the National Post, Spacing, and Now Magazine Toronto. In addition to the printed press I have also been featured on SPACE television, Liquid Lunch webTV, CBC radio and as a guest host on CKLN radio discussing various issues such as public art, philosophy, commercial semiotics and city politics.

Toronto Star Sidewalk Artist- feature article about the history and success of the HEY APATHY! artworks

Blog T.O./Grid Wall Street Art- Interviews and photos from blog TO and the Grid

What pleases me most about this publicity is the broad range of social political dialogues my work has been involved with. When I first started doing these drawings my intentions were (and still are) to develop a visual language in order to teach, inspire and perpetuate a sort of abstracted activism I had discovered in the works of artists such as Alan Moore, Alexandro Jodorowsky and Masamune Shirow. I had no interest in developing fanciful techniques, or prestige collectibles as that sort of work never appealed to me. Instead I was drawn towards unique ideas and stories that delved into more substantial territory attempting to aid the audience in the pursuit of intellectual or spiritual edification. Being fully aware of the hypnotic prowess of printed pictures and words finding a way to express my self through mainstream media is always appealing.

In this respect looking back at the articles I’ve been involved with over the years is actually quite rewarding. While the work remains almost invisible to art world reviews it has perpetually found its way into the newspapers in association with numerous other intriguing topics. For example my work has been featured in Spacing Magazine a publication dedicated to investigating urban development and public spaces. The work has also appeared in various Toronto newspapers articles associated with political issues and city initiatives. That being said I don’t always agree with everything the work is directly connected with (and little that is printed in the papers in general) but the presence of the drawings speaks for itself. In the worst case scenario I find the inclusion of the drawings subversively humorous and in all instances potentially powerful.