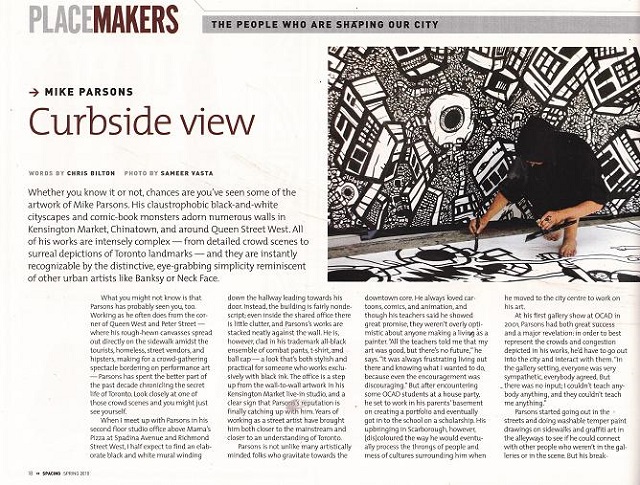 OUTDOOR ART! Whether you know it or not, chances are you’ve seen some of the artwork of Mike Parsons. His claustrophobic black and white cityscapes and comic book monsters adorn numerous walls in Kensington Market, Chinatown, and around Queen Street West. All of his works are intensely complex- from detailed crowd scenes to surreal depictions of Toronto landmarks- and they are instantly recognizable by the distinctive, eye grabbing simplicity reminiscent of other urban artists like Banksy or Neck Face.

What you might not know is that Parsons has probably seen you, too. Working as he often does from the corner of Queen West and Peters Street- where his rough-hewn canvasses spread out directly on the sidewalk amidst the tourists, homeless, street vendors, and hipsters, making for a crowd gathering spectacle bordering on performance art- Parsons has spent the better part of the past decade chronicling the secret life of Toronto. Look closely at one of those crowd scenes and you might just see yourself.

When I meet up with Parsons in his second floor studio office at Spadina and Richmond, I half expect to find an elaborate black and white mural winding down the hallway leading towards his door. Instead, the building is fairly nondescript; even inside the shared studio office there is little clutter, and Parsons’s works are stacked neatly against the wall. He is however, clad in his trademark all-black ensemble of combat pants, t-shirt, and ball cap- a look that’s both stylish and practical for someone who works exclusively with black ink. The office is a step up from the wall to wall artwork in his Kensington Market live-in studio, and a clear sign thast Parsons’ reputation is finally catching up to him. Tears of working as a street artist have brought him closer to an understanding of Toronto.

Parsons is not unlike many artistically minded folks who gravitate towards the downtown core. He always loved cartoons, comics, and animation and though his teachers said he showed great promise, they weren’t overly optimistic about anyone making a living as a painter.” All the teachers told me that my art was good, but there’s no future,” he says “It was always frustrating living out there and knowing what I wanted to do, because even the encouragement was discouraging.” But after encountering some OCAD students at a house party, he set to work in his parent’s basement on creating a portfolio and eventually got into the school on a scholarship. His upbringing in Scarborough, however, (dis)coloured the  way he would eventually process the throngs of people and mess of cultures surrounding him when he moved to the city centre to work on his art.

At his first gallery show at OCAD in 2001, Parsons had both great success and a major revelation: in order to best represent the crowds and congestion depicted in his works, he’d have to go out into the city and interact with them” In the gallery setting, everyone was very sympathetic, everybody agreed. But there was no input; I could teach anybody anything, and they couldn’t teach me anything.”

Parsons started going out in the streets and doing washable tempera paint drawings on sidewalks and graffiti art in the alleyways to see if he could connect with other people who weren’t in the galleries or in the scene. But his breakthrough was at the Toronto Outdoor Art Show “When I did that there was no question that I preferred the public performance to the art gallery. Because there were thousands of people coming through and I was talking to children and adults, elderly ladies, and a variety of people from all over the world- it was unlike anything I’d ever seen in a gallery. This is where I really started talking to people.”

This is also when Parsons started working on large scale paintings in public places, like the construction hoarding around the then under construction Sharp-Centre for Desing ( a feat which took two carefully planned nights for him to cover the 200 feet of white walls with iconic monsters). Though it wasn’t a commissioned work he was confident that the school wouldn’t mind such a creative use of free space. And whether or not they took issue with the “Roach” mural, it lasted for a couple of years. Incidentally, Parsons ended up doing a lot more commissions from then on- and meeting more people who were already familiar with the work.

Whatever Parsons is working on- outdoor art, wall paintings, street-strewn canvasses and, more recently a series of comics that he plans on developing into a graphic novel collection- it all feeds back into his desire to understand and discuss Toronto. “On the street, the idea was to put down as many ideas as possible in the public space tro try and initiate a dialogue with the city,” he explains. “As a result of that, I’ve spent the better part of the past seven years talking to people from all over the world and all over Toronto. And each year the drawings have gotten closer and closer to identifying the city and everyone in it and the way it works.”

While Parsons remains a proud street artist, Toronto art heavyweights have begun to notice: he’s sold work to renowned art critic Paul Duvall, won an award from MOCCA, and even designed a t-shirt for the AGO’s reopening. Edward Day curator Kelly McCray included Parsons’ work in a 2006 show entitled Obsession. “I don’t see Mike having to fit into the Toronto art scene,” McCray says. “He uses one of the most accessible surface mediums going- the sidewalk and outdoor art exhibitions. He is doing what many artists hope to achieve through gallery exhibitions. Parsons, however, seems to continue to remain independent of the art system, and capture a sincere client following. Audiences recognize the work he produces. I feel he fits within the Toronto Cityscape, making the city that much richer.”

For most artists, a high profile gallery would be the logical next step. Parsons has rejected such offers for years, preferring to preserve the dialogue between the city and the outdoor art provided by his street level vantage point. “At this point, I know what my mission is and what my statements are, and where my art is going.”

This outdoor art article appeared in the Spring 2010 edition of Spacing Magazine.