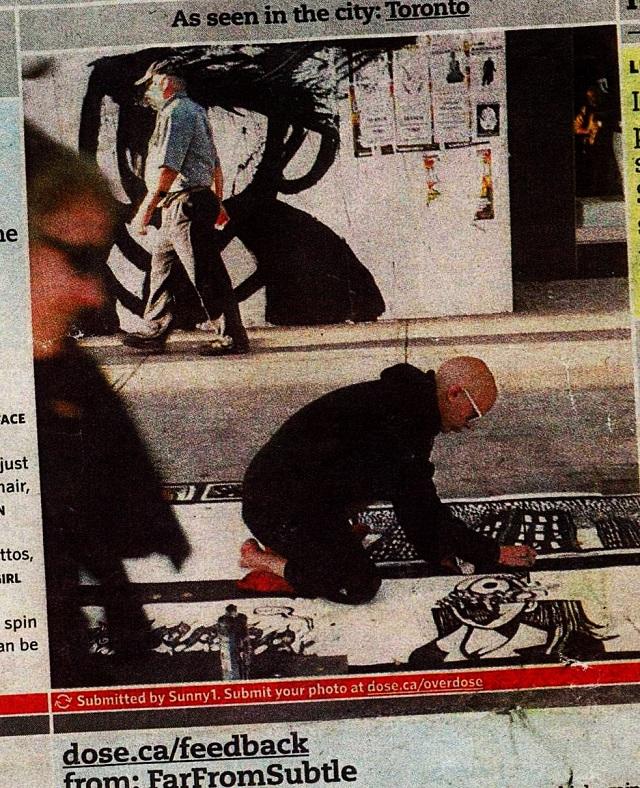 Wall Street art in downtown Toronto! This photo (above) was taken on Queen Street West and shows me working on the sidewalk infront of a mural I'd made on the construction walls of a store under renovation. 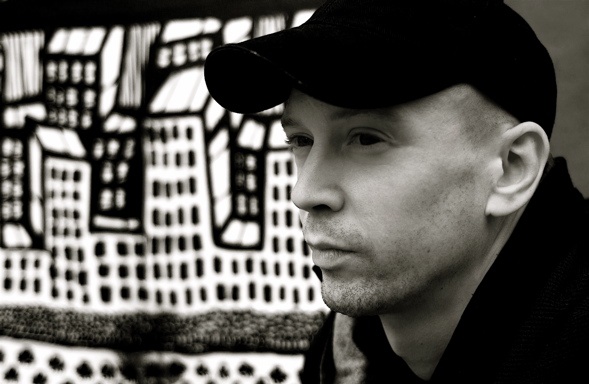 Blog TO: The Toronto Portraits

Canadian artists are always crediting our northern environment as an inspiration for their work. Emily Carr, Margaret Atwood and K.D. Lang have all acknowledged how our climate has lead them to pursue themes of solitude and perseverance.

The weather effects street artist Mike Parsons a direct way; if it's nasty outside no one will walk past his stand on Queen West and buy his work.

Mike was born and raised in the remote reaches of Scarborough. Being secluded from the city next door began to wear on him in his teen years.

"Where I grew up in the suburbs it was always a long trek or bus ride to the closest coffee shop and it would always be the same people there. It would be hard to meet anyone else; I started going downtown to party. I could see there were problems in Toronto, but I could also see that in the suburbs there was no opportunity to communicate with people. I went out one night to a basketball court to paint, just for fun, and I almost got beat up. Everybody there was just hiding."

Mike loved comic books as a young man; he dreamed of being a penciller for them one day. A large inspiration in his High School years came from a Ralph Steadman book of "Fear and Loathing in Las Vegas" ink drawings. One his teachers gave it to him.

"The High School teachers would often encourage my art, but tell me there was no career in it. That was tough because right after graduating I didn't really know what to do. I was just hanging out in the suburbs, working at a garden centre with no idea. Luckily I eventually came across a couple OCAD students who were working with me for the summer, and were also getting a bit of illustration work on the side. That's when I realized the teachers were wrong. I applied to OCAD and moved to Kensington Market shortly after."

Downtown living was overwhelming to Mike at first; his early Toronto drawings show crowds of city dwellers as 'faceless bubbleheads' and the cityscape as a giant, rusty gear. After a couple months, however, he realized how important the hectic street life was to his vision.

"I knew if I was going to create anything good, I was going to have to talk to people, to interview them. I kept seeing people making 'Woe is me' art, talking about their problems, venting. I wanted to find out what other people think, find out things that were common to me and them, and explore that. Homeless people, businessmen, everyone."

His occasionally bumpy relationship with OCAD only strengthened his resolve to stick to graphic, comic book-like ink drawings. As he began to experiment with creating and selling canvasses on the street from a stand, his signature style became an asset to separate his work from everyone elses. Soon, the gallery scene beckoned.

"The gallery situation for me felt like a glass bubble; like something that segregated the artist from the people coming in. Instantly I felt like if I took this route, that I probably wouldn't get to talk to people. I find it so weird, because there are people who will approach you on the street and start talking to you like it's nothing, but once you go into a gallery setting it's like 'you're that guy!'"

Mike has had a lot of success as Toronto's most prolific wall & street artist. He made the cover of NOW Magazine in 2003, he's been commissioned for a number of billboards around town and most recently he was chosen by the Art Gallery of Ontario to design a limited edition t-shirt for their re-opening this month. They are for sale in the gift shop at the Dundas entrance.

His wall street art work is extremely engaging; there is a story in each of canvasses, like a single panel comic, if you study them long enough. His style has remained constant but his technical skills and deft commentary on city living have continued to mature. As Mike gets older, though, the prospect of keeping his art stand open year round is increasingly dim.

"Being out on the streets is really difficult on the body. You're in the elements, the water, the dirt and the wind, and it wears on you physically. I would never want to stop working on the streets entirely, but I realize that in five years I don't want to be hauling my stuff down everyday, when I'm 35 or 36. I have to make the switch to galleries, but I also want keep going with my interaction with people. A street level studio with large windows would be ideal, but I haven't found that yet."

This wall street art article was featured in the November 2008 edition of Blog T.O. 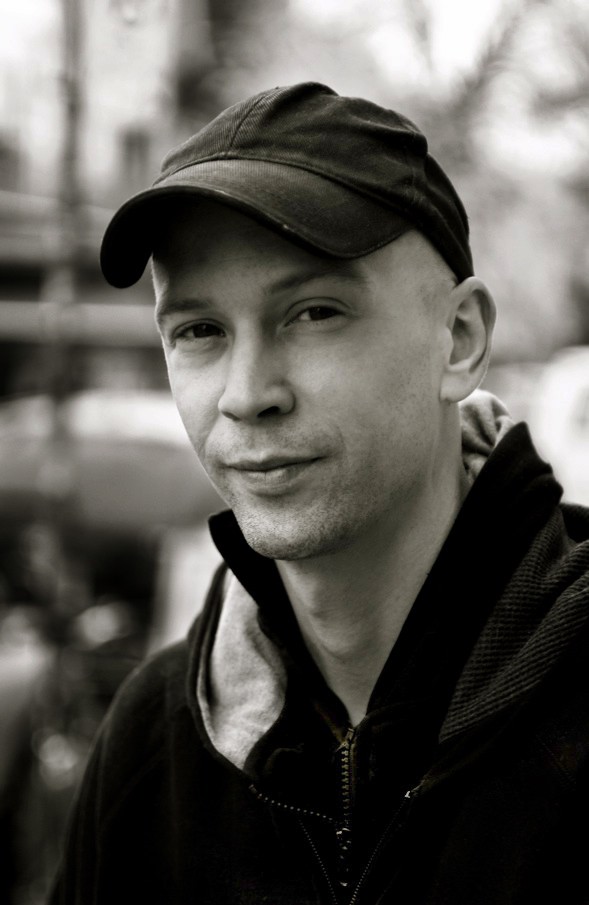