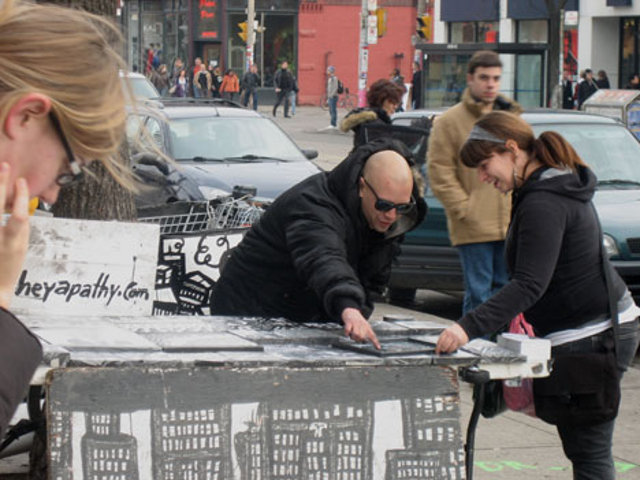 BLOG TO Portraits: We're well into December now, which means winter is upon us, and Mike Parsons is still spilling black ink all over Queen Street, busily crankin'-out awesome drawings for all your holiday art needs.

Likely, if you've strolled along Queen Street West, east of Spadina Ave. near Lush, you've seen Mike--a pioneer of Toronto's street art-vending scene--laboring over huge canvases with brushes and buckets of ink, often to crowds of people who swarm to see the artist in action.

Mike's iconic black & white, cartoon-like drawings depict apocalyptic scenes of exploding buildings, toy-like weapons of mass destruction floating through minimalist cloudscapes and giant b-movie monsters wrestling skyscrapers as decapitated businessmen scream in horror. At first glance, we see our collective psyche at its darkest moment. Though, if you look beyond the stark, open-wound qualities of his drawings, ironically a beautiful child-like innocence will fill your bosom.

His prolific body of work--an astonishing collection of drawings, comic books, animations and massive murals--spans six years of hardcore determination. And when I say hardcore, I mean HARD CORE. This guy's a drawing machine. Aside from eating, sleeping and guzzling coffee to stay awake, he does nothing but DRAW. That's how he makes his living: by turning-out drawings night and day for the more-than-affordable-art market.

Since 2000, when his ink-bespattered journey began, Mike has made the cover of NOW Magazine Toronto; he's garnered several solo exhibitions, including a retrospective (something usually reserved for more senior, "established" artists); he's received numerous mural-commissions throughout the city; quite a few people collect his work; and he maintains a private studio, which is managed by his friend and official representative, Ashley Proctor, owner of Creative Blueprint (Arts Management Services).

Although Mike loves the street, drawing for the public and seeing first-hand how they respond to his work, it limits the size and quality of his work. Really, says Mike, he wants to spend less time on the street and more time in his studio creating cleaner, more detailed, more commercially viable drawings. Doing so would greatly increase his chances of getting gallery exhibitions--where he could demand higher prices for his work--which would likely make life a little easier for Mike. But here's the catch: if he leaves the street, he can't afford his studio (where he lives and stores the bulk of his work).

In light of this, I ask myself: if you take Mike out of the street, do you take the street out of Mike? Perhaps a better question is, if Mike leaves the street for the studio, is Mike still a street artist? I mean, Mike is the street; and the street is Mike; the two are synonymous. Perhaps the street is merely a phase of Mike's career, and he's destined to become something else entirely. Food for thought (and perhaps for a follow-up Blog TO article). 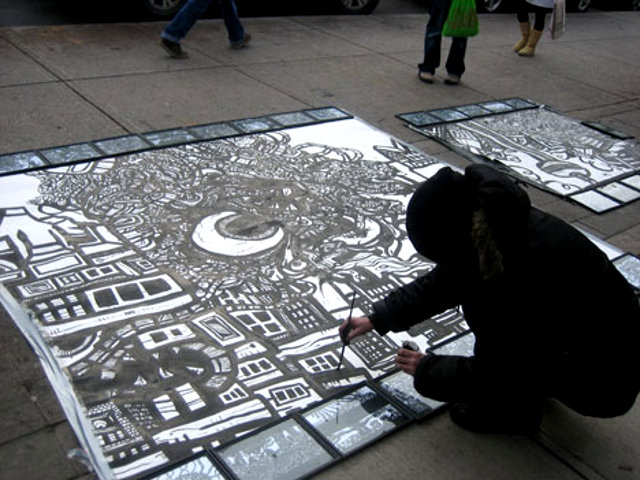 This article appeared on Blog T.O. in December 2006