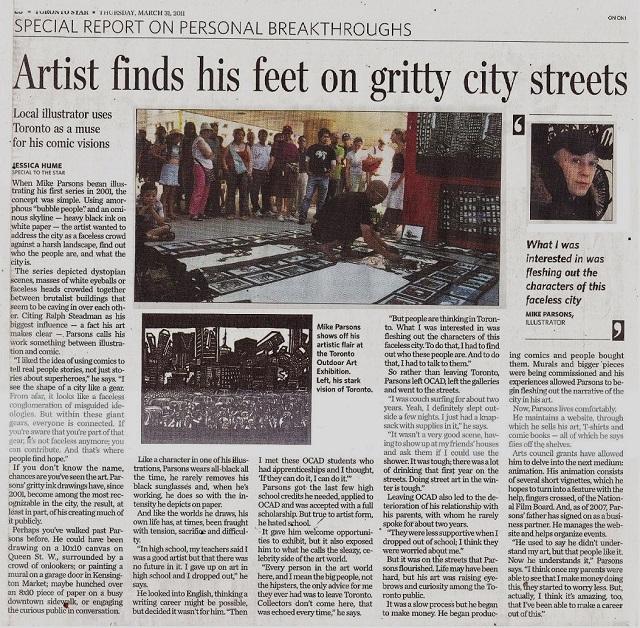 When Mike Parsons began illustrating his first series in 2001, the concept was simple. Using amorphous “bubble people” and an ominous skyline-heavy black ink on white paper- the artist wanted to address the city as a faceless crowd against a harsh landscape, find out who the people are, and what the city is.

The series depicted dystopian scenes, masses of white eyeballs or faceless heads crowded together between brutalist buildings that seem to be caving in over each other. Citing Ralph Steadman as his biggest influence, a fact his art makes clear- Parsons calls his work something between illustration and comics.

“I liked the idea of using comics to tell real people stories, not just stories about superheroes,” he says. “I see the shape of the city like a gear. From afar, it looks like a faceless conglomeration of misguided ideologies. But within these giant gears, everyone is connected. If you’re aware that you’re part of that gear, it’s not faceless anymore; you can contribute. And that’s where people find hope.”

If you don’t know the name, chances are you’ve seen the art. Parsons’ gritty ink drawings have, since 2001, become among the most recognizable in the city, the result, at least in part, of his creating much of it publicly.

Perhaps you’ve walked past Parsons before. He could have been drawing on a 10 x 10 ft canvas on Queen St. W., surrounded by a crowd of onlookers; or painting a mural on a garage door in Kensington Market; maybe  hunched over an 8x10 piece of paper on a busy downtown sidewalk, or engaging the curious public in conversation.

Like a character in one of his illustrations, Parsons wears all-black all the time, he rarely removes his black sunglasses and when he’s working he does so with the intensity he depict on paper.

And like the worlds he draws, his own life has at , at times, been fraught with tension, sacrifice and difficulty.

It was a slow process but he began to make money. He began producing comics and people bought them. Murals and bigger pieces were being commissioned and his experiences allowed Parsons to begin fleshing out the narrative of the city in his art.

Now Parsons lives comfortably. He maintains a website, through which he sells his art, T-shirts and comic books- all of which are flying off the shelves.

This is an exert of the sidewalk artist article by Jessica Humes which was published in the printed edition of the Toronto Star March 31, 2011