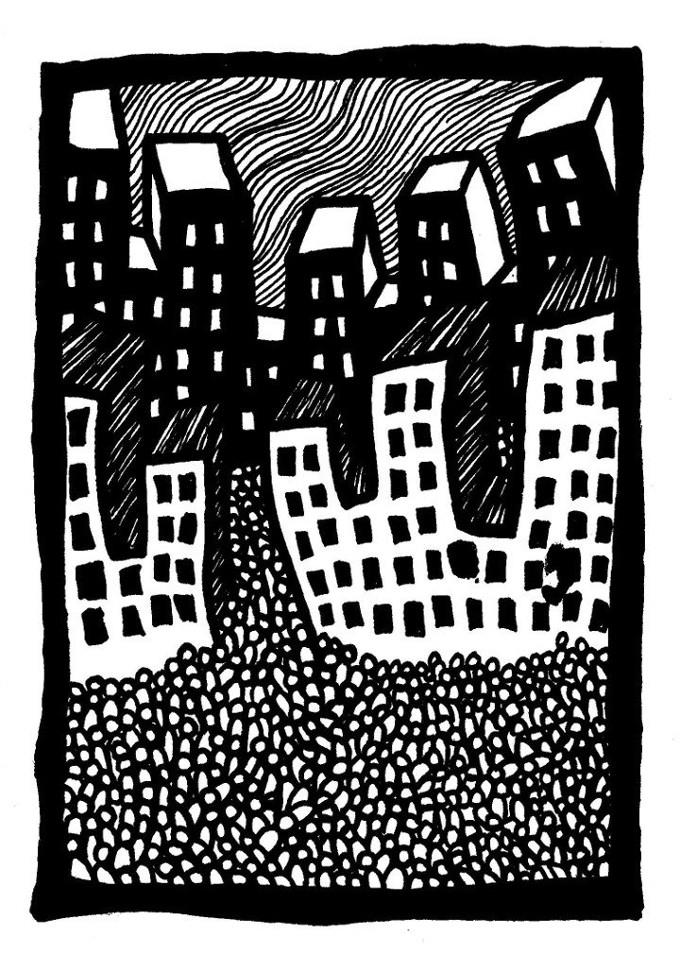 DANCE OF THE METROPOLIS

Surreal dreams, City Artwork and urban myths. The buildings are swaying from side to side moving to the rhythm of the traffic on the streets. The stomping of feet and the roar of the engines give the surreal symphony its bass and beats. Mixing with the rumbles comes the electric highs, buzzing notes sing out from plastic devices, wires and screens. Together with the strange sounds of mettle and concrete the wind whips between the towers completing the melody. Elevators and escalator dance all around filing the orchestra in out out of the instruments. Despite all the chaos, stress and despair a musical medley of motion helps the city find it's way through the routines. It is almost too huge for human ears but if you stop, take a deep breath and listen very carefully, our tiny brains will open up ,organize and recognize the music of the metropolis...

In contrast to the despairing “graveyard” city artworks  I also included a number of more energetic illustrations. In these works the landscape is usually depicted from a closer vantage, sort of like the street level as opposed to the extreme aerial views. From this vantage the buildings seem to come to life like waving hands or weird trees. The skies are filled with psychedelic energy also expressed through the motion of free hand lines. The crowds remain anonymous but the hustle of the city feels much more intense. The idea behind these works was to show how we can get caught up in our daily routines and the action of life but are still a part of the huge faceless city. The images give us a sense of excitement while retaining an existential and alienating expression.

While the images from this series certainly stand alone it is interesting to note that they were all created as a part of a single exhibition. My goal was to develop an imaginary cartoon environment made up of hundreds of drawings done in a similar style. The entire collection was presented in a giant U-shaped exhibition space that permitted the audience to enter and stroll through the city. Using the different view points and slight variations on the theme the installation basically introduced the metropolis from distanced aerial angles and then brought the viewer deeper into the city eventually leading to the destructive apocalypse artworks. The entire series was intended as a surreal life sized comic book that was meant to be experienced rather than read.