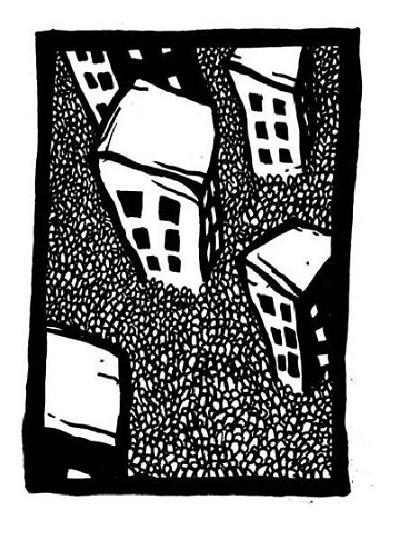 TOMBSTONE TOWERS IN THE CITY OF GRAVES

Tombstone Tower Graveyard City Drawings, Row by row the skyscrapers fill the skyline like an enormous cemetery. Standing like tombstones the towers dictate the metropolis's ultimate fate. Filling faceless people in and out of offices in elevators to nowhere while perpetually devouring the life force of the crowds and nature itself. With concrete roots and steel tentacles the towers dig into the soil as if they were trees, only instead of replenishing the earth they repay their perpetual consumption with disease and waste. In a close examination of the little compartments we can find unique stories as the citizens spiral around with routines, business deals and social interactions yet when we look at the bigger picture all these tiny lives become insignificant. From a distance the towers take the shape of monstrous machines and the crowds of anonymous denizens disappear in anonymity. This is the City of Graves...

The “City of Graves” is one of the major symbolic concepts I explored while creating this series of ink drawings. I have always been intrigued by the conformist nature and hypnotic routines in major urban centres especially the absurd widespread acceptance of unsustainable practices. These concerns led to my expressions of the city as a graveyard like landscape. Using the buildings as tombstones and the overpopulated hordes of faceless people I meant to exemplify the anxieties of alienation and nihilistic qualities of life in the big city. The idea was to strip the metropolis of the individual and superficial distractions in order to exemplify the overall effect this lifestyle produces.

There were approximately 100 variations on the “Gravestone” imagery ranging from 5 inches x 7 inches up to 10 feet x 15 feet. The largest work was one of my favourite city drawings in the series as it was big enough to engulf the viewer's periphery giving off the sensation of actually standing in the imaginary metropolis. All of the works were made using a hand carved bamboo quill pen and black India ink. This is a very difficult tool to use as it has a tendency to drip and is not very precise however I used these qualities to my advantage in order to create an organic effect. In accepting the mistakes and ink accidents the works gained a unique organic energy that couldn't be produced otherwise. Years later I revisited this imagery during my graffiti street art performances only using a brush instead of the pen. While the brush allowed for a greater speed suitable for the performance I always found the work was too clean and more cartoonish than the original explorations.