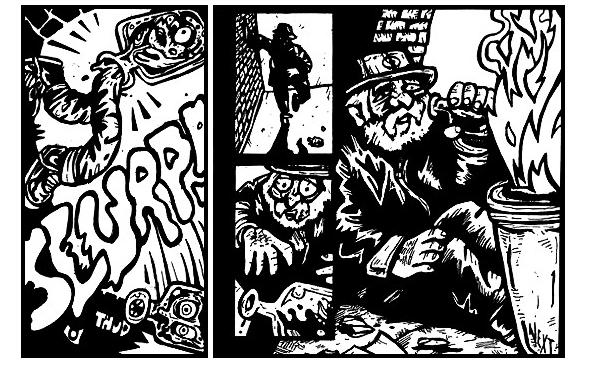 UNDERGROUND COMIX STRANGE TALES: As the Mad Scientist's apprentices hurry through their list of intended victim they encounter people from all walks of life. With their magic shopping carts full of human recreations they travel the city substituting children, business men, politicians and even the destitute. As they come to a certain section on the list they find themselves moving through alleys, abandoned buildings, shelters and under bridges in order to experiment on societies forgotten.

Various tactics are used to make the surreal switch. As a result of research they discover a combination of vice and mental illness seem to rule this underworld making for easy targets in the mission to replace mankind. Unlike the people who participate in mainstream society, many of these denizens are already under control by external factions. Living without hope, dreams or determination these people offer little resistance to any attacks.

Regardless of their supposed societal insignificance the Mad Scientist recognizes the homeless as part of the machine. His experiment would not be complete if he didn't test every angle and he realizes that these lost souls all have connections to the big city. Some of them still have family, friends or social workers who still care for them. Others have found little niches in the downtown streets. Some of them are negative but others remain charming and every last one of them has an effect on society as a whole.

Therefor there is little wonder that they are subject to the “replacement theory” as the Scientist intends to change the entire world from the bottom to the top.

When I drew these underground comix my intent was to criticize alcohol. I am not making light of the homeless situation. Living in Toronto and more specifically working as a street art performer I have had a lot of experience with homeless people and many of them became my friends. I did however discover that there were generally three issues that held these acquaintances back. The troubles almost always stemmed from mental illness, apathy, and addiction or a combination of the aforementioned.

The first problem was mental illness, I met many people who suffered various degrees of mental illness and really had no chance to fully participate in society. Some of these people were still functioning, and could often times be great conversationalists but were obviously incapable of moving forward or holding a proper job. One of the most heartbreaking examples was a local street performer who played the saxophone for money. The guy could play anything by ear and was a really nice person but his suffered from paranoid delusions would perpetually break down and turn violent. Each time he had an episode he'd be arrested and sent to the hospital were they would fill him with drugs and turn him back to the streets. While the drugs were in effect he would remain calm but refused to play the saxophone until his prescription ran out and he'd start playing, and suffering through the cycle of madness, all over again.

The second problem was what I will somewhat incorrectly label apathy. This attribute was primarily held but the younger street kids. These people were generally intelligent and physically capable of joining the workforce but chose a life of reckless abandon, travelling and partying in the streets. While there was certainly a lot of drugs and alcohol being consumed by these people it was not responsible for creating their situation. Most of the street kids I talked to either ran away from troubled homes, hated school, or hated pop culture. They were living a punk/hippie lifestyle and had more or less found their place in society In essence they were really just trying to create a world of their own.

The last problem and the most troublesome was the alcoholism. Here I discovered a disease that was far more vicious than mental illness or apathy because it was man made and self inflicted. I met many, many street people who were friendly, coherent and often extremely intelligent in the mornings but were obliterated screaming, fighting drunks by the afternoon. This was always the saddest situation because unlike those suffering from mental illness we all knew that if this crew would stay off the alcohol they could all change their lives. Of course it's easier said than done as hundreds of thousand suffer from this affliction already know. At any rate it is an interesting topic to tackle in my underground comix as I try to understand the plight of my friends on the streets.

READ THE UNDERGROUND COMIX FROM THE BEGINNING