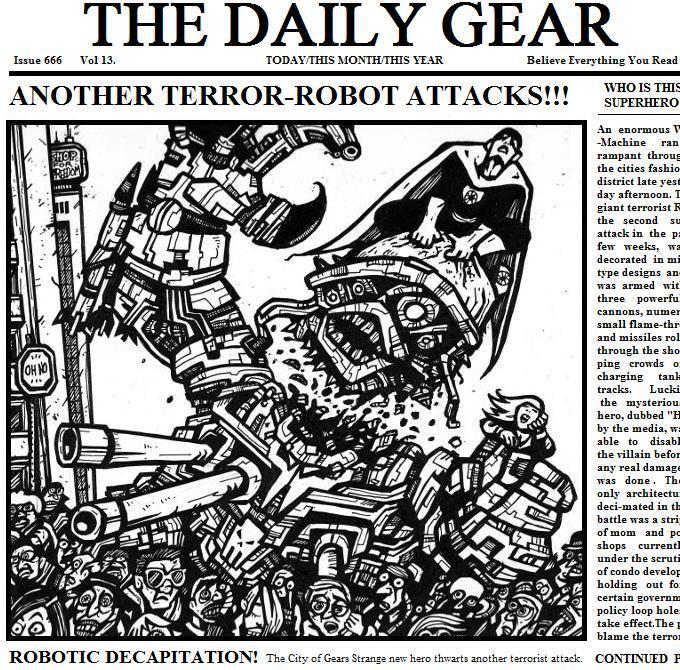 NEWSPAPER COMICS "AND IN THE OTHER NEWS..."

Newspaper Comics & Strange Stories: Having been the subject of various articles, interviews and essays over the years I have had a reasonable amount of first hand experience with what I call the information warp. This strange reality bending black hole sucks in data twists in around, folds it on top of it self and even adds elements of its own in order to split out predetermined fabrications according to it's employers bias. These warps are generally hired by mainstream media but can also be found working for alternative publications. What tends to happen is that the higher up team up with marketing research and decide ahead of time what kind of stories they would like to report. The days of investigation and listening in on police radio are long gone. These days the headline precedes the story and the article is written before the investigation. The final stage, research and interviews, is basically a formality in which a few “realities” can be added to the script to make it more credible. Of course when this sort of data is unavailable the reporter calls upon the aforementioned information warp.

One example which stands out for me, probably because it was the first time I heard of such things, was in regards to an interview my father had done on television when I was still quite young. I remember the newspapers and programs were spouting all sorts of terrifying tales of recessions and poor business. The exact details escape me but certain stock and bank related issues were apparently foretelling the apocalypse. At this time my father was employed by one of the major men's suits companies. He worked in their giant downtown flagship location and was the vice president of sales so he had a really good sense of the how the business was doing. In the midst of all the horror stories about the collapsing economy a television crew showed up at my father's workplace asking about the store's financial situation. It was nearing Christmas time and business was actually booming and my father was excited to promote the companies good fortune. However despite being recorded for fifteen minutes reciting the great sales and positive outlook for the coming season when we watched the news that evening it told a completely different tale. Only a few sentences remained of my father's interview and they had been edited to sound like the store was struggling. The segment continued to report on the demise of civilization and used my father's prosperous employer as a signifier of the end.

I have since had many encounter's with the dreaded information warp but another incident which comes to mind occurred more recently after I got a telephone request to be interviewed by one of the city's major newspapers. The reporter was told to write stories about people triumphing over personal battles. Being aware that I started out as a street artist and was now becoming reasonably successful the writer got the idea to use me as the subject. Although there may or may not be an interesting story behind my progress as an artist the interview questions were geared in such a way as to fabricate a great struggle. For example my decision to work as a street performer was a very decisive one, I wanted to experiment with public performances and interact with people outside of the gallery circuit. However the published article reported that I had been ostracized by my family and society and left to die homeless on the sidewalks where I climbed my way out of the gutter by drawing pictures in the streets. And so the information warp which inspired the inclusion of newspaper comics in my anthology had struck once again...

READ NEWSPAPER COMICS FROM THE BEGINNING