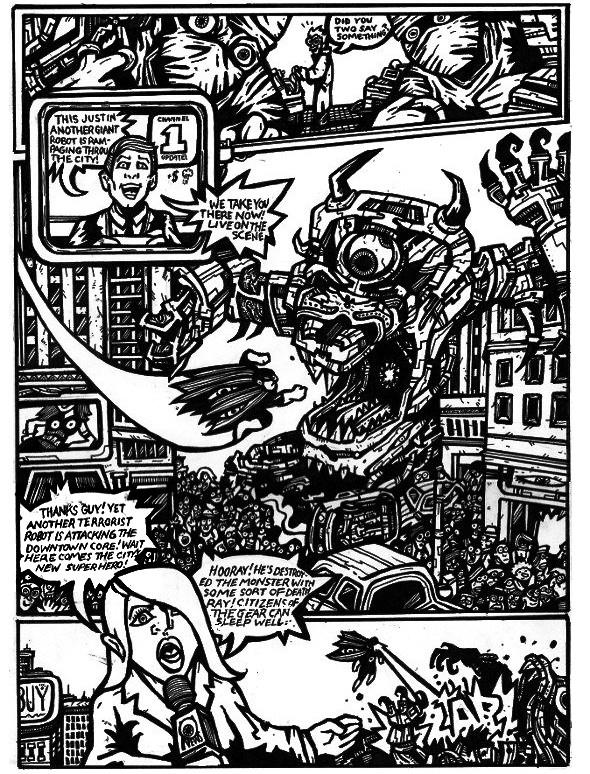 WEBCOMICS STORIES "ATTACK OF THE ROBOTS"

WEBCOMICS STORIES: The city is under siege by an uncanny barrage of Giant Robot attacks! These towering metallic monstrosities have been sighted in increasing numbers stampeding through the downtown core. Major damage to skyscrapers, condominiums, shopping centres, power lines and road ways have been reported! There have been no threats nor warnings of the attacks and no terrorist faction has yet to claim responsibility. It does however seem clear that the machines have only one goal; to destroy the City of Gears! As of his broadcast there have been three major attacks and no reason for any one to believe they will stop.

Fortunately there haven't been many serious human casualties thanks the help of a mysterious tiny super hero with eyeballs on is cape. The media dubbed this hero “Studabaker Hawk” after his first appearance less than a year ago. At that time Hawk was initially perceived as a villain and was captured on film battle three of the cities own Robot Police Sentinels. However it was later revealed that those Robot Officers were actually malfunctioning and the tiny super-human had in fact thwarted disaster. You can read all about the origin story adventure in HEY APATHY! Book 1. Following the events and intense battles of his first appearance the hero had vanished from the spotlight and no one had seen or heard of him until these recent events. It is rumoured that he had in fact been trapped inside one of the machines and was imprisoned in a scrap yard for several months however that story has yet to be confirmed or written.

It is now commonly accepted that the hero is on our side and in light of the attacks it would appear that he is dedicated his powers to stopping malicious Robots. This new breed of violent mechanics are easily twice the size of the city's largest Robotic Police Officer and can be recognized by numerous demonic features including horns, cyclops and triclops eyes. Although there are rumours that the robotic beasts have been instantly materializing at the various scenes of the attacks, the police have not accepted this theory and believe they may actually be parachuting from the sky, using a cloaking device to approach the city or sneaking around in human sized disguises and uses a computer virus to accelerate their size. Please keep an eye out for any signs of an approaching Terror Robot and contact the authorities immediately, do not, I repeat DO NOT try to subdue the creatures on your own...