SYMBOLIC ART "THE CITY OF GEARS 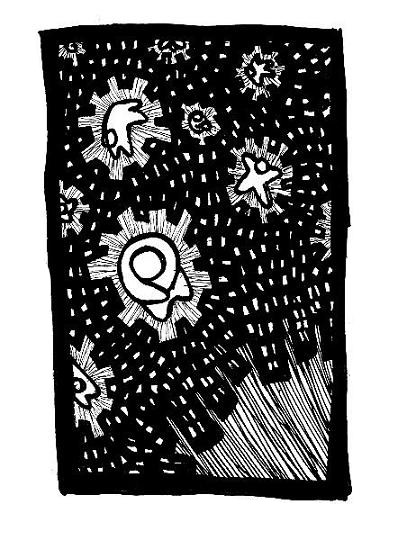 The city is like a giant factory, the building take the shape of gears while the people fuel the machine. Filled with endless crowds of faceless denizens spiralling around in nihilistic routine the metropolis produce dark ideologies. The archaic merchandise is like a religion telepathically composed of greed, stress, garbage and alienation. It is sold as unobtainable ideals, fancy disguises and fleeting pleasures subjecting it's patrons to an inescapable addiction. Even as they retreat into the solitude of their compartments, offices or rooms the cyclical consumption never ceases as it only truly exists as an intangible state of mind. The thoughts of the city continually spin long after the actions seem to subside. The tombstone towers are closed for the evening but the production rolls on...

“The Apartments” is one of my favourite images from this series of drawings. Most of the works dealt with exterior scenes depicting the crowded metropolis and it's graveyard like buildings however this was one of the few that actually looked to the insides of those towers. The characters seem to be seeking refuge inside little rooms. Some of them appear to be in the foetal position or floating weightlessly around the compartments. I drew each of the rooms in the same gear shape they repeats throughout the landscape drawings to show how all of our routines are part of the “machine”. Even within the sanctity of our own apartments we are still a part of this larger entity. The work also makes comparisons between collectivity and alienation by showing how similar and connected we all are even when we are alone.

I only made two versions of this image. The first (shown here) was one of the 5 x 7 inch works I made while commuting back and forth to the city. The second was a 4 foot x 6 foot version that I made at the college. I remember working on this in the O.C.A.D. print making studios while my friends were preparing there lithography stones. This memory stands out because it was the only large drawing in the entire collection that I made outside of my basement. Most of the works were extremely intricate, oversized and time consuming but this was one of these easier images so I could actually make it in a single sitting and didn't really require the comforts of my studio.