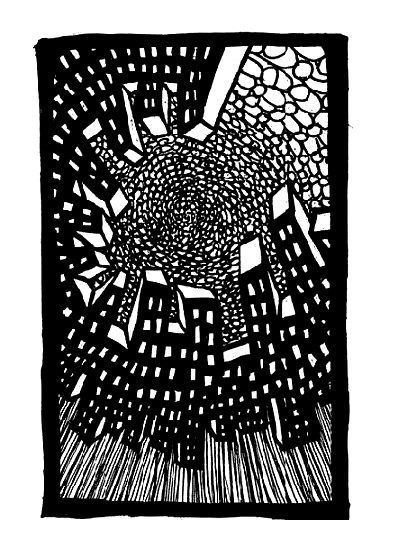 In this spiral drawing the City is revealed as a monstrous machine. The giant black tombstone towers take the shape of an ominous gear while the tiny faceless citizens provide the energy to fuel the factory. Day after day the city continues to spin as it slowly evolves growing and gaining power with each invisible rotation. The routines of the denizens mask the production as the masses are manipulated by means of desire and vice. Each individual is hypnotically induced into a vile selfish preoccupation permitting dark forces to move about unchecked. In this hazy state the people are rendered blind to the controlled conformity and spiral freely into oblivion without questioning whether their actions are their own. With insidious vertigo the metropolis consumes and destroys all the resources at hand in a strange quest to produce nothingness as the cogwheels spin.

This City of Gears artworks were created between the fall of 2000- and the end of 2001. There were approximately 50 variations on this theme ranging from 5 x 7 inches up to 6 x 8 feet. The smaller works were drawn with refillable technical pens and were generally made during my daily commute and free time downtown. The larger works were all drawn in my basement studio with black India ink on Stonehenge paper using my hand carved bamboo quill pens.

For this series I used a limited set of symbols which I explored through repetition in order to create a large scale installation. The initial symbols were rectangular tombstone towers and circular little “bubble” people. At first these icons were presented in a manner that likened the city to a grave yard but as I continued to iterate the imagery new ideas would start to evolve. The “City of Gears”, which has become one of the most prominent themes in my work, was invented in this manner. In fact I hadn't even thought about the factory or gear connotations when I made this. I remember I was just interested in the technical and visual possibilities of turning one of the graveyard scenes into a spiral. After trying a few of these the gear mythology just jumped out at me as I discovered on of my most important stories through trail and error.