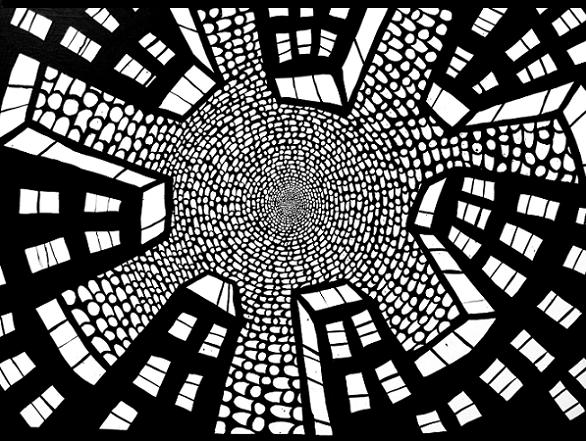 Canadian Art Ink Drawings,  From a distance the city appears like an ominous gear propelled by an endless sea of faceless denizens. Spiralling centrifugally around our metropolitan routines the scene plays like some sort of hypnotic talisman. With nameless people perpetually filling streets and fading into the horizon a frenzied fit of inertia moves towards some unknown goal. The tombstone towers circle the periphery imprisoning the hordes while thousands of anonymous little bubble people spin amidst the simultaneously alienating and assimilated crowds.

“The City of Gears” is one of the most prominent symbolic images in my “Hey Apathy!” ink drawings. When I first conceived this imagery I was working out of a secluded basement studio and envisioned the metropolis as a cold nihilistic conglomeration of superficial and commercial ideologies. In order to express this I developed these dystopian crowd scenes which likened the people and buildings to a factory giant cog wheel. The original drawings were featured in my inaugural exhibition in Jan 2002. This set included several small ink drawings as well as a number of large scale and mural sized artworks. Since that time I continued to use the symbol and have developed an entire mythology behind this imaginary place. However while this faceless hieroglyphic version remains a staple in my stories I now consider it as a distanced perspective of the big city and have created a close up counter part in which the unidentifiable characters reveal themselves as massive crowds of diverse individuals.

This particular rendition of the “City of Gears” was made while I was working as a full time graffiti street artist in downtown Toronto. It is interesting to note that this version has a lot more motion and energy than the original drawings made a few years earlier. The change in the composition was directly influenced by working in public with life and action all around me. In the initial drawings there is a decidedly serene sense of alienation were as this work shows a much more rapid vertigo type effect. This drawing was done with acrylic inks on a 4 ft. X 6 ft. stretched canvas. In addition to being made while I was sitting in the streets the work also travelled around the city with me for various performances & festivals. Eventually the work sustained a considerable amount of damage due to the harsh conditions but I've never regretted sharing the image and telling it's tale out in the street.