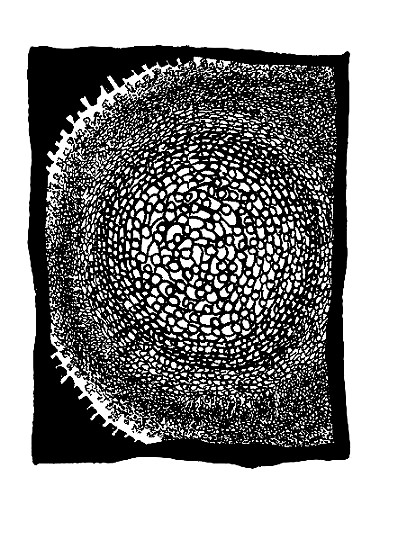 THE CITY OF GEARS!

Spiral Art! From a distance the city reveals itself as an ominous gear endlessly populated by hordes of faceless denizens. Moving in routine hypnotic unison the crowds spiral around and around propelled the monstrous cogs. Lost in a sea of anonymity the citizens begin to look, act and think alike as an assimilated conglomeration of misdirected ideologies. There is no room for the individual, no need for creativity and no tolerance for questions. The tiny bubble people perpetually file in and out of little box prisons to be shuffled in between the tombstone towers continuously consuming with meaningless obedience.

The “Hey Apathy” series was my first serious body of work as a fine artist. The drawings deal with themes of urban alienation, conformity and the trappings of routine. I started the drawings in the fall of 2000 in preparation for a small student exhibition scheduled for the following spring. In order to create the works I decided to limit my self to a minimal palette consisting entirely of black India ink on white paper and using only two simple symbols; tiny circles as people and rectangular blocks as the buildings. I wanted to crete a nihilistic and vertigo landscape to express my fears for a world that seems to have gone so wrong.

As the images progressed I developed a diptych counter part to the crowded city scenes. The second set featured apocalyptic waves, similar to the nuclear test footage, annihilating the city. The two variations combined to tell a tale expressing my concerns for the cold commercial world we live in and a prophetic speculation of things to come if we didn't change our ways.

The first installation took place in the O.C.A.D. drawing and painting showcase featured in the hallways of the colleges art department. I received a lot of positive feedback and was interesting in expanding the scale of the works (at that stage they ranged from notebook size to 4 ft. X 6 ft.) so I decided to continue the project for the duration of 1 year. I was able to book a larger exhibition space for Jan. 2002 and set out with goal of creating 13 enormous mural versions of these existential artworks.