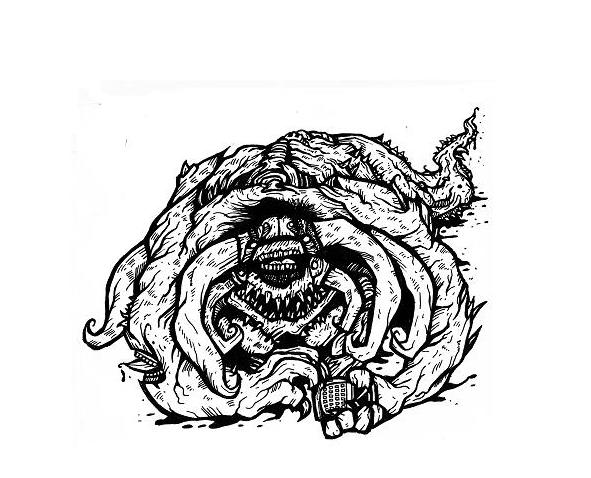 Sci Fi Story: Many who've taken interest in the weird developments known as progress, often ask a variety of questions concerning man's limited capabilities when travelling through space and time. Just such a query influenced my unusual involvement in the downtown core this morning. I received an email notice that a local company trading in technologies, was about to unveil a new device. The advertisement invited an elite selection of business people to a midday presentation and a chance to purchase the unprecedented product at an unbelievably low introductory price.

I'd nothing much better to do than to investigate further and attended the presentation with little debate. The new electronic was proudly unveiled although not a member of the crowd would have guessed it. The tiny computer was too small to see from the chairs and looked an awful lot like a infantile worm. The spokesperson held proudly in her manicured hands a small cup resembling fish bait in expectance of great applause.

"This little computer will change the way we travel. It's amazing capacities are far beyond any of last years lines!" The model slipped in her grand gestured excitement and toppled the container sending some of these "worms" reeling to the floor. There was a bit of a disturbance as some security thugs rushed to the stage. However a few seconds of whispers and shuffles restored all composure and the presentation proceeded as though uninterrupted.

The announcer began describing the prowess of the “worms“. She told us of innovative virtual simulations bordering on actually reality. Claims were made that the device would be the faster, infallible, and of the utmost import. It sounded like a sci fi story. As the speaker continued I could almost imagine the effect. Instantly the surroundings started fading away, I found my self on an island of tropical decent. The sun started shining and birds passed the sky as I felt the comforting and relaxing sensation warm me more. Though not dissimilar, the warmth was more intoxicating than any I’d felt on a beach.

Information passed through my unconscious as a flickering script and before I could enjoy the euphoria of the beach I knew that my files had been sorted. All of my office work for the next three full years flashed through my mind's eye orderly and complete. Then I watched several movies in a half of a second. Each entire film immediately and cohesively implanted in my brain. It was as though I‘d viewed the pictures a hundred times and for my whole life. The experience became joyous when suddenly I contacted several friends. There was everyone that I'd ever met. We were all on the island chit chatting away in near perfect utopia. Then a strange sound began.

I was laughing uncontrollably in ecstasy when the piercing began. The noise started aggravations before actual harm. At first a soft ringing, but growing steadily louder, like some one sitting at the next table growing increasingly intoxicated and volumous. Eventually I forgot all my hallucinatory fantasies falling sweaty to the floor red faced grasping my ears. Louder and ill-pitched by the second I felt the urge to scream out but couldn't bare the additional sound. Hands started on my shoulder trying to hold me down and there was the shuffling of feet all around. I heard the announcer's voice trying to calm the distressed onlookers when the noise finally stole my vision and moments later my consciousness.

When I awoke I was in my apartment completely free from pain. I'd no idea how I'd gotten there nor much recollection of the time in between. Of coarse this left me rattled so first I went for a short walk. After breathing some fresh air I returned to the computer. The email notice was not in my files and though I contacted the tech company no one seemed to know anything of the “worm“. Acting naturally, I laid on my bed, another bad dream perhaps or only a story? It was just before passing into slumber that I resigned to belief in these logical explanations. Of coarse it was a dream.

I rolled on my side with my ear to the pillows when I heard another sound. It was all bass and liquid, completely different from the nightmarish pitch which I believe might have attacked me earlier, but undoubtedly from the same source. Deep within my ear the noise ruggedly escalated, at first a soft humming, but growing steadily louder before evolving to terrifying volumes. The sound became intolerably aggressive when a large gelatinous squish signalled it's end .The little surreal metallic brain-worm-thing excavated itself from my cranium slopped on to the floor an escaped into a crevice beside the internet wall jack under my desk.