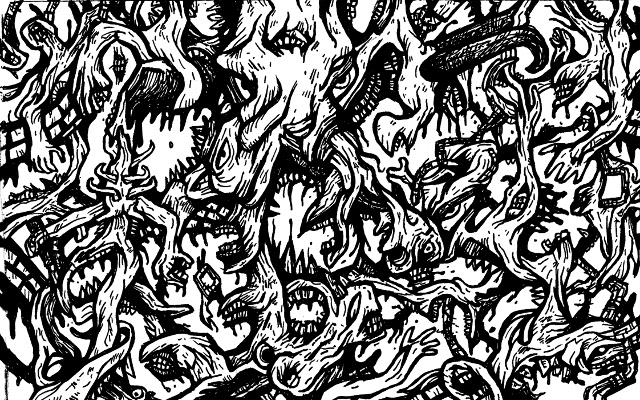 Weird Tales:  I must apologize in advance for the following dog-ate-my-homework type excuse but there will be no surreal comics post on this the 18th of April 2010. Although I awoke refreshed and complimented by a beautifully shining morning, my regular artist's rituals were interrupted by the most peculiar event. When I stood up, thirsty yet enthused, I noticed a glimmering pool of an opaque liquid had spilt across my bedroom floor. At first I assumed that a bottle of white book binding glue had toppled in the night. Slightly frustrated, as I forgot to hydrate my self, I set forth to examine the damage and potentially clean up my mess.

As print-makers and painters, and carpenters alike all well know, an upset bottle of glue across wooden panel floor can be disastrous. If the glue has settled, the likely hood of removal is certainly nil. I knelt down to touch the puddle and was instantaneously taken aback by the depth at which my fingers had submerged. While the substance sat only millimeters from the floor, I easily fit half of my hand into the now inexplicable spillage.

In my less than alert state, only just out of bed, I was barely able to process the occurrence. Inhaling a combination of surprise, shock and alarm, all within a singular breath, I felt a sinking depression of the senses as of one who is malnourished upon receiving the most traumatic of news. Instinctively I pulled back my moist covered hand when the white sopping ooze lifted whole in it's shape and flew up with my arm engulfing the room. All at once I was surrounded by an odorless and tasteless air constituently heavy not entirely unlike a gelatine or white glue. For a second the atmosphere was suffocating but as the substance filled my lungs, and then all of my airways, I was overtaken by a sanctifying calm.

I floated, or sank, through the thick globular nothing for a duration which felt as rapidly exasperating as the passing seconds of a movie montage spanning millennia. I heard the sounds of many keyboards tapping when a minute blackened orifice opened in the opaque space out in front of me. First a hand reached from within, then another and another exited the shapeless salutation. The figures peeled back the thick liquid white and the sounds became louder. 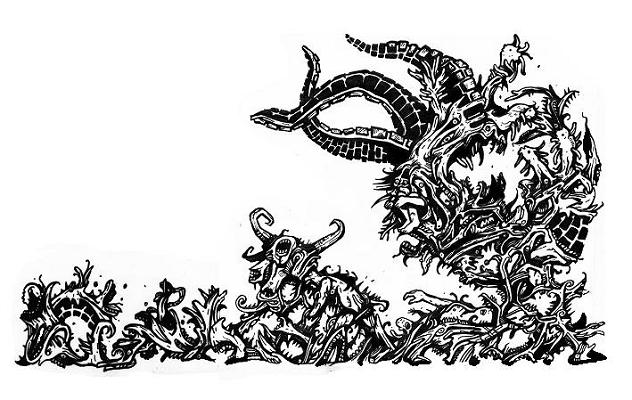 Before me were thousands of people all morphed one seething tar soaked entity, each individual barely coherent except by the nature of their tasks. In one clustered area of the mingled anomaly there were people eating, and people preparing the meals and people preparing the animals for the meals. A crowd of onlookers gathered and gawked, even cheered at the slaughter, while other slaved like an army and others still gorged. In another region of the glob people were building things and simultaneously destroying them. There were liars and thieves, and saviors and scholars all curiously defined by their meaningless chores. People-ish forms laughed and danced and ran and typed . Oh how they typed.

Many words in many languages could be seen sprouting out in mingled fonts only to be enveloped by the blank tar periphery. Lost almost as soon as initiated, thousands upon thousands of stories, communications, essays, and articles, appeared and disappeared along the gelatinous surface of the weird white air. There were many, many, many blogs. All of the texts were jumbling together simultaneously complimenting and refuting one another. Most of the information blended and blurred in the atmospheric pudding. A handful of these writings stood out from the storm. Their authors received much celebration and adoration from all districts of the seeping strange form. Their words were boldly animated and appeared larger and clearer than the rest. But alas of these few, even fewer had anything to say.

I heard the sounds of ten thousand radios mixing repetitions with ads. The terrible static beat and faceless harmonies turned my ears in unto themselves. A snippet of every horrific tune ever written set a torturous train of thought to work on my psyche. The experience could only be likened the time when one has an unwanted melody playing over in ones head but cannot remember all the words, and thereby is trapped perpetually cycling only a most irritating half-chorus. It was like that, only it was every song that had ever pestered me all mixed into one. For a brief moment the amalgamation of noise cohesively recited a line from Tina Turner's Private dancer.

Advertising executives were laughing, purely white people chinked filled glasses with indulgence, and young soldiers trained for battle. Long monotonous rows of hands trapped in singular motions produced boxes upon boxes from nowhere that other hands grasped for and instantly unpackaged. The opened receptacles were then discarded and subsequently collected by another line of figures partaking in a similar, yet entirely unique, repetition. Mediocre celebrities built a fortress in the desert separate from the glob and teenagers ate celebrity magazines which in turn caused them to vomit up their used souls. I saw artists abrasively rubbing their faces against such magazines, yelling "LOOK AT ME! LOOK AT ME!" and I watched a film crew violate the verse of magnificent authors who'd died without fame. The overall affect of the grotesque embodiment left little clue as to distinguish the cries of horror from those of ecstasy.

Once again I was alone and surrounded by white. Only this time in my weird tale I dare not open my eyes for the brightness penetrated so fully my eyelids that I could already see as clearly as day. Everything went silent until I heard a deep bass voice speak up from within the farthest recess of that space and my conscious. " WHY? ". The articulation was unmistakable and mockingly perverse. In my mind I had answered, but the thought was so fleeting that I cannot recall it. The result of this forgotten response set the omnipotent presence into infuriated laughter. The laughter ensued and expanded shaking me all around. As the trembling exemplified the bellowing turned to coughing, then choking and finally resolved itself as a combination of choking and gasping. I can only guess that wherever I was, was probably the stomach of something and that the combination of my consumption and the laughter had resulted in that something's indigestion. I felt sporadic convulsions and was propelled upwards by an invisible ,yet tangible, sea of pebbled acidity. This burning reverse-fall lasted for about 5 seconds before I found my self standing back in my bedroom. For a brief moment my clothes felt damp but I soon realized otherwise. I looked to the floor but could find no evidence of the adventure.

My nerves have now settled, and after drinking a considerable amount of water I have decided to pass the experience off as pure fiction. I am, however, tainted by retentive images of the typography which had been written all over that unusual spilt glue tapestry beneath my bedroom floor. Only now, in my recollections, the words all say "WHY?" and I’ve come to realize that at present there are far more of these words than the world will ever need. Besides it is late and I am exhausted and have many tasks for tomorrow’s morn, so there will be no more weird tales posted from HEY APATHY today!