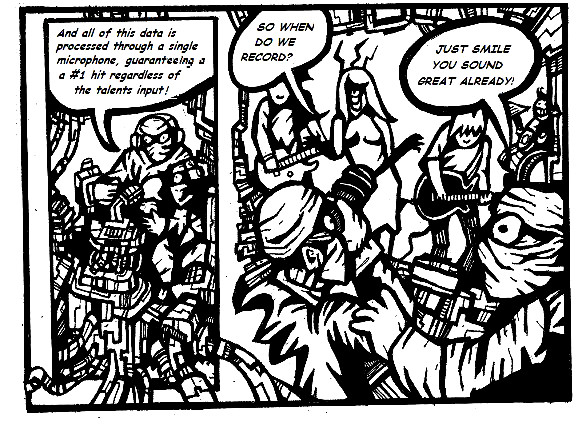 The Siren Songs... It was an instant rise to stardom for the young talent. She was picked up for a couple of magazine ads as a teenager and was noticed almost immediately. Telephone calls started coming in from the television companies when a couple of agents showed up at the door. She told them that she liked modelling but was most interested in music and had been studying vocals and piano her entire life. Her parents agreed with her wishes and signed her away excited about the promising career ahead.

The agents made a few phone calls and whisked her off in a limo. Within hours of the contract they had arranged a phoney talent contest. Although the young starlet wasn't informed the event was rigged in order to promote her as the next big thing in music. Her competitors were all very talented, some of which were even established because that was the best way to boost her popularity without wasting any time. If she was judged as the top idol in a group such as this her name would be recognized immediately and no one would no the event was fixed.

In the weeks that followed she visited with many specialists. Her siren training regiment included aerobics, dance, smiling, dieting, make up, fashion and even meetings with plastic surgeons. While still too young to need any upgrades it was natural for the idols to learn about the wonders of silicone as the agents pointed out they wouldn't be 13 years old for ever.

After weeks of non stop appointments the young girl became frustrated about the music. She wanted to play piano, to sing, to rehearse for the upcoming live event. After a considerable amount of troubles a meeting with her agents was arranged but she could get a word in as they were both too busy praising and coddling her in between phone calls and bookings. Finally she decided to book her own musical training and slipped off to the sound booth to practise her scales.

In the booth she discovered a large electronic device attached to the microphone. Curiously she turned on the machine and a number of blinking lights sprang to life. A blue laser beam shot out from the contraption and scanned the sheet music in her hand. A moment later the machine burst into song. Mechanical yet perfectly pitched notes filled the room. The sounds gave away the rising stars location and she was discovered by her always smiling agents who dragged her from the booth. “Don't worry about the machine, it has already been programmed, you will sound great at the show, all you need to do is to lose 2 or 3 more pounds!”

READ WEBCOMICS FROM THE BEGINNING