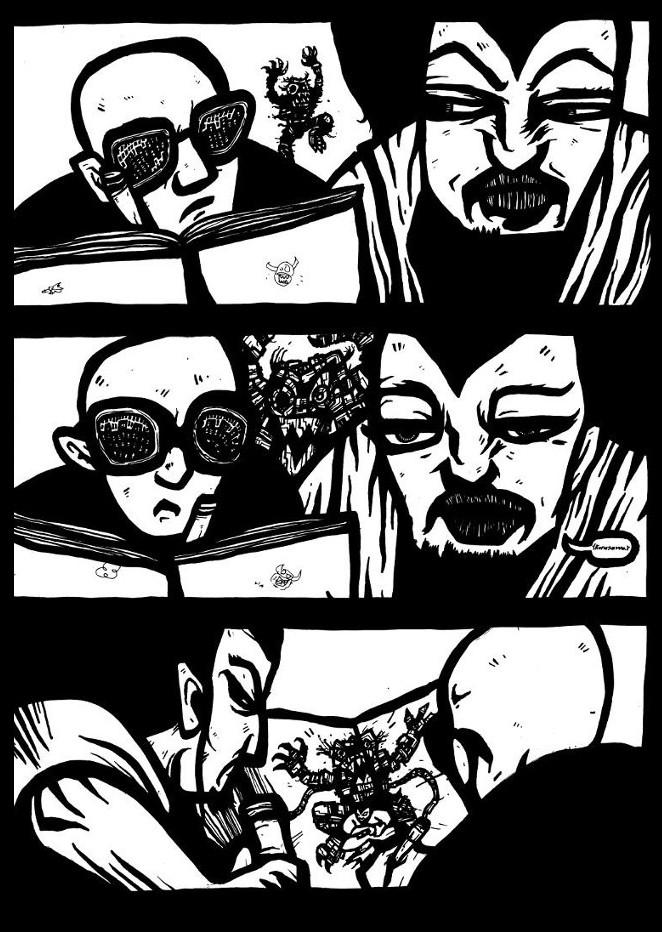 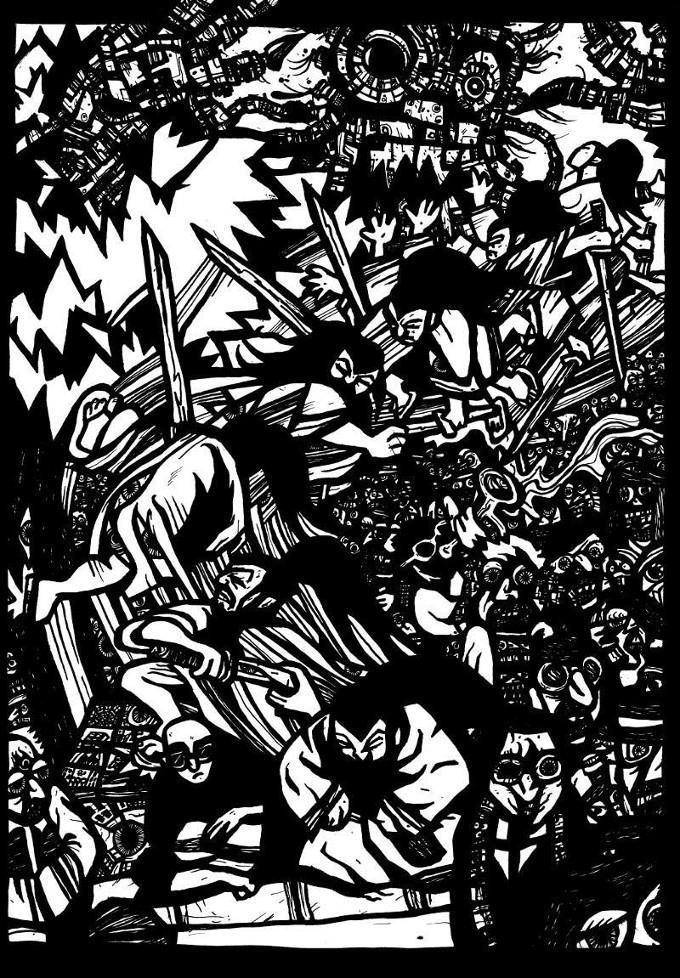 ABOUT THE HEY APATHY! MANGA WEBCOMICS

HEY APATHY! MANGA WEBCOMICS! A wandering Ronin stops for a brief encounter with yours truly, the little bald Street Artist, when out of nowhere a giant Junk Machine charges onto the scene. As quickly as I can draw it the Samurai draws his weapon and catapults himself off a nearby tree but is his psychedelic footwork fast enough to thwart the mechanical beast or has the technological surprise attack gotten the better of our weird anti-hero? Each comic in the HEY APATHY! series is a stand alone adventure inspired by a different genre of storytelling. The characters are related by a common setting as they all reside in the imaginary in the City of Gears. The companion stories below the comics pages explore the history of this mythological metropolis.

"THE DEMONS OF THE BLUE GATES PORTAL RIFT" Pt 3

MANGA WEBCOMICS COMPANION STORY: One of the most famous and threatening incidents that the Guardians ever faced took place at the City's Blue Gates. There were four major entrance ways to the metropolis each strategically positioned to permit easy access to the surrounding resources. The Yellow gates connected to the farmlands, the Green gates to the forest, the red gates with the mines and the blue gates to the ocean. While many alternative routes and means to accessing the resources existed these gates were the most important and efficient passageways for transporting large quantities and heavy traffic. As such the gates were essential to the cities welfare and accordingly protected from attacks by monsters, nature or man. Little did anyone expect to face all three obstacles at the same time...

It was during the peaceful spring as the city recovered and repaired the damages from the great fire that a new company appeared. This corporation specialized in water manipulation claiming to have discovered new chemical processes which could condense, multiply, and manoeuvre water in incredible ways. Their formula would be extremely efficient in the transport and consumption of water effectively changing the entire system. One of the most interesting accomplishments the company had succeeded in was the ability to turn water into vapour form and back again at will and without any loss to the volume.

While the King's government always welcomed innovation they were also vary cautious when it came to questions of water and health. After numerous tests and evaluations the King's scientists were still sceptical about the water's properties after undergoing the process. They hadn't determined any solid evidence for concern but were firm in requesting an extended period of incubation to make sure the water was in fact safe. The end result being seven year ban on the use of the new technology in order to monitor the possibility of slow mutations. As always the king was reasonable and overly generous in his decision. Since he could not allow the company to market the product commercially he decided to award them with grants funding so they could continue developing the product during the extended period of testing. The King also guaranteed contracts if the tests proved everything was safe.

One would imagine that this ruling would be satisfactory to all parties however the company seemed to be distraught. Numerous appeals to the courts as well as a vast amount of press propaganda was launched in opposition to the King's decision. It is questionable whether or not the company even continued their research as it appeared as though they were spending the grants funding on their campaign. Of course, as was mentioned earlier, they had little chance of swaying the public's opinion because the King had proven himself time and time again. In addition to his trustworthy reputation, the citizens were also well educated and were not about to let anyone take unnecessary risks with their water.