ENTER THE ABSURDITY "CITY OF GRAVES"

Dada Art and weird tales...Tombstone Towers line the metropolis lane ways hovering over the streets exhuming an ominous presence. Like ancient monoliths the buildings seem to repeat themselves endlessly without any unique features to distinguish their purpose. Below crowds of faceless little denizens flow in, out and all around the concrete structures. Lost in routine conformity the citizens appear like a sea of insects moving as a single terrifying organism devoid of individual identities, thoughts or goals. Perpetually moving in a meaningless and busied frenzy the chaos of it all seems to amalgamate in serene beauty as the entire scene amusingly resembles the view from an anonymous graveyard...

The Tombstone Towers were the basically the first large scale artworks I ever made. The very first drawing was done on a light weight paper resulting in a poor settling of the ink and wrinkles however I was really excited by the imagery. After this technical failure I discovered the heavy weight Stonehenge paper which was much more suitable and have worked with ever since. These works were created in the winter of The original set included five ink on paper drawings ranging from 4 feet x 4 feet to 4 feet x 6 feet. 2000-2001 and were first exhibited in the Ontario College of Art & Design Drawing Showcases in March 2001. Although I had done a reasonable amount of experimenting before creating these pieces most of my workup to that point involved pastels and figurative subjects.

In addition to the large ink on paper works I made 1000's of mini-posters and comic-zines to compliment the project. I pasted the mini posters, which ranged from 2 x 2 inches to 5 x 7 inches, all over the hallways of the college and surrounding streets. I created a number of short comic-zines I handed out and left in various places for people to take free of charge. I was really inspired by the dadaist approach to work and was only concerned with spreading a philosophical and political message. Although as time passed commercial endeavours became necessary to continue producing artworks but I have never let this aspect of reality interfere with my passion for story telling. The inspiration of Dada art would later become an even bigger part of my process as I began working as a full time street art performer.

ABOVE: Sample pages from the mini comics and posters that I used to spread nihilism in the streets 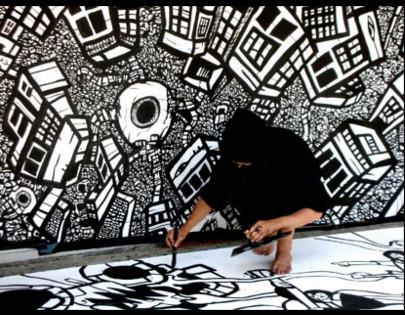