READ FROM TO PAGE 1 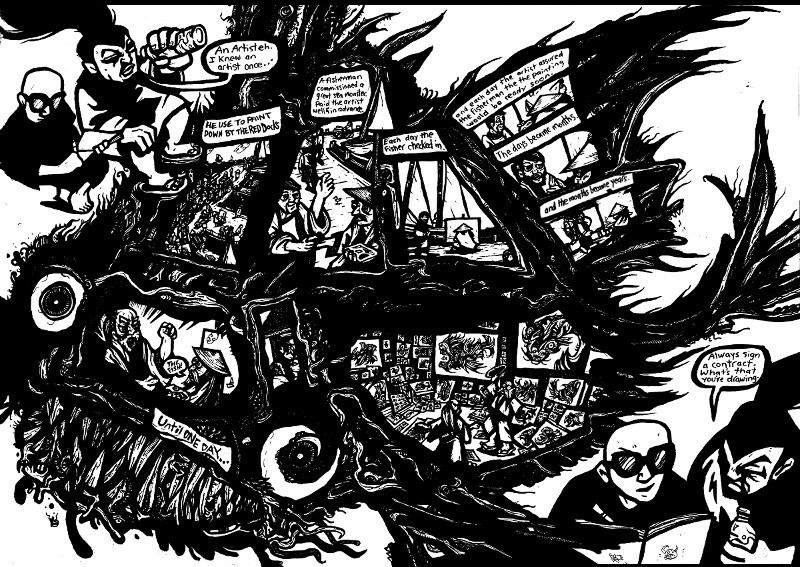 COMIC BOOK ONLINE SIDE STORY " The Demons at the Blue Gates"  With it's fine ruler, good relationships and healthy citizens the City of Gears was politically sound. Unfortunately there was a down side to this. With no legal means to overtake the city, the Emperor’s enemies would often resort to nefarious tactics. Unlike many of the other cities where politicians did battle through scandal and laws were decided financially, the King could only be attacked secretly using sabotage and theft. In one instance ninja had been commissioned to poison the water ways by a pharmaceutical manufacturer who was marketing the antidote, while on another occasion a synthetic food company made a similar attempt to prevent the import of it's organic competitor. It was an age of espionage in which the black arts of the Koga were constantly employed by crooked businessmen trying to move in on the turf. For this reason many people still question the true cause of any fires. As a result the City had appointed a team of incredibly powerful Samurai operating under the title of the Royal Guard.

These Guards were selected as youths and dedicated their lives to training. Although several families passed the title from father to son, the selection process was based on tournaments to determine dedication and talent with absolutely no consideration for lineage or caste. However, as is nature's law, it wasn't unusual to find the same skills running through the blood from generation to generation. At the time of the great fire the guard was led by master Kurosawa Kazuo with his son Goseki Kojima as one of the top commanders. ( Note: all the guards take on new names based of legendary storytellers and the heroes that inspire them). It was the Royal Guard's primary duty to handle the dangerous underworld ninja as well as to assist in any matter's in which their talents would be useful.

Although it was technically peace time, with no openly waring civil states, the guard was never wanting for action. In addition to patrolling the nights for the ninja these warriors had many other opponents to deal with on the outskirts of town. As the commercial world had yet to annihilate all magic and imagination, monsters still existed and often posed a severe threat to the suburbs and villages. There were still ogre attacks, storms of giant birds, man eating insects, and the occasional zombie plague. The guards had dealt with all sorts of these creatures on a regular basis which kept them sharp, in shape and experienced regardless of wars or ninja attacks. It was a dangerous time yet the City held it's own and it was rare for any of these obstacles to cause any serious trouble... (Cont'd)