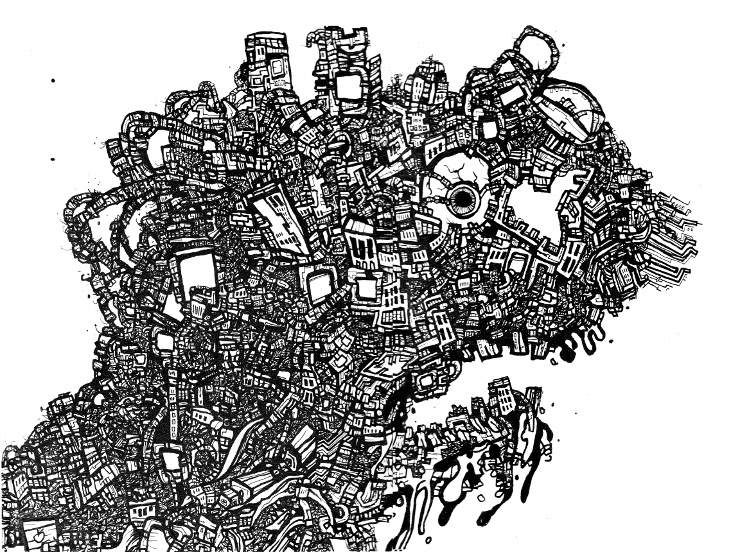 Canadian Art Ink Drawings: All the people, cars, wires, bricks and bones collide as the city's chaotic routines whirl around day after after. A collective energy rises to the rhythms of alarm clocks and espresso machines while the hum of machinery instigates the commute.. Skyscraper windows become eyes and the entrances open like gaping mouths while the tiny little denizens flow to and from cubicles and out into the streets. Countless computers buzz as the days activities get underway. Transactions, interactions, conferences and chance meetings weave their way through the fabric of the concrete jungle. Stories flow through the air waves and are communicated through flashing screens and disposable manuscripts guiding the metropolis movement towards some monstrously obscure ends. As the hours pass even the most miniscule occurrence echoes throughout the vascular lane ways and sewer systems recreating the city as a whole for each and every aspect animate or otherwise is part of a larger entity, the big city is alive...

“The City Face” is an 18” x 24” pen and ink drawing I made while working as a full time graffiti street art performer. At that time I would set up a portable studio and vendors booth on the sidewalks of downtown Toronto's busy fashion district and create all of my works right there in public. Inspired by the crowds and the city itself I made several images dealing with the personification of the metropolis. The basic concept behind these works was that the “Big City” and the “individual:” were intrinsically related, neither could be overshadowed by the other yet the could not exist independently either.

One of the interesting things I noticed while observing the streets was how connected everything really is. An obvious example of this could be seen on the roads when there was an accident or delay. Something as simple as a street car stalling could disrupt the flow of the whole district. Another noteworthy example involves incidents or stories from the news. On any given day I would see hundreds of people passing by and if something interesting had happened in the world it was always reflected in the crowd. The story would manifest itself in the conversations, postures, the mood and overall energy of the people. As a result of these ideas I often drew the metropolis as a large human shaped creature made up of all kinds of tiny depictions of life in the city.