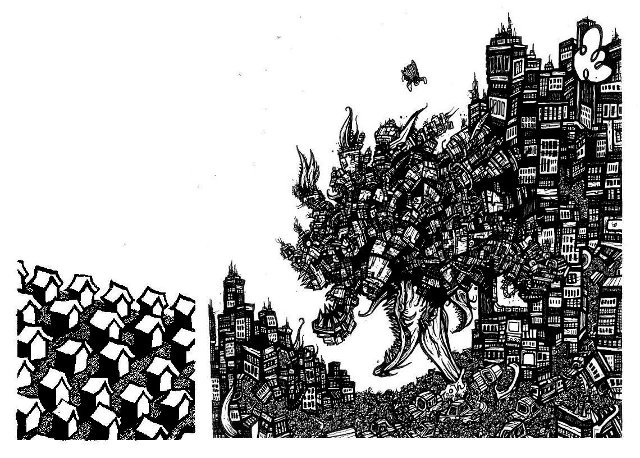 THE CITY OF GEARS!

BLACK WHITE ART DRAWINGS. From a distance the city reveals itself as an ominous gear filled by endless hordes of faceless denizens. Giant tombstone towers hover over the bustling commuters and consumers whose movements power the nihilistic factory. At a glance the metropolis appears uninviting, overwhelming, even distasteful, yet somehow it continually demands investigation. Driven by my curiosity and the desire to socialize the city entraps us and we are drawn into the crowded carnival. Falling from afar the concrete charms us with neon light laughter, dreams from the billboards or dreams of the gods. Strange faces, new places, monster robots and lost superheroes engage in a telepathic ballet between purchases and the sky. The city is overrun by alien technologies and despairing moments but somehow, someway there is something exciting about the display. From our new vantage, in the middle of the madness, the city continues to act as a gear, only now the crowds seem so different. It is all the unique and amazing individuals, not a conglomeration of cogs, who fuel this machine.

This series of black white art drawings presented a diptych comparison between my earliest artworks (HEY APATHY! 2001-02) and my more recent street art investigations (Black White Art 2008). In the initial series I drew the city as a skyscraper graveyard filled will infinitely anonymous crowds of tiny little bubble people. The nihilistic imagery examined the unsustainable nature of a culture bent on alienation and conformity. In order to gain a better understanding of the phenomenon in question I then proceeded to develop a progressively public artist’s process. Through the use of outdoor festival and street art performances I was able to meet and discuss topics of great concern with thousands of people from all over the world and of all walks of life. As a result both my drawings and philosophical perception of the city changed immensely. The new artworks focused more on hope and the role of the individual as opposed to the despairing conformity of impersonal crowds.

Entitled “Epilogue” this collection consisted of seven 18 x 24” detailed pen and ink drawings. Each board featured two panels, one hieroglyphic cartoon and one detailed comic drawing. The panels represented the city from a distance and the city from street level respectively. These were the last artworks I made while working outdoors as a street artist in 2008. The works were featured at the John B Aird Gallery’s Annual Juried Drawing Exhibition in Feb 2009 and a limited edition “Epilogue” giclee print was created for the Nuit Blanche festival in October 2009.