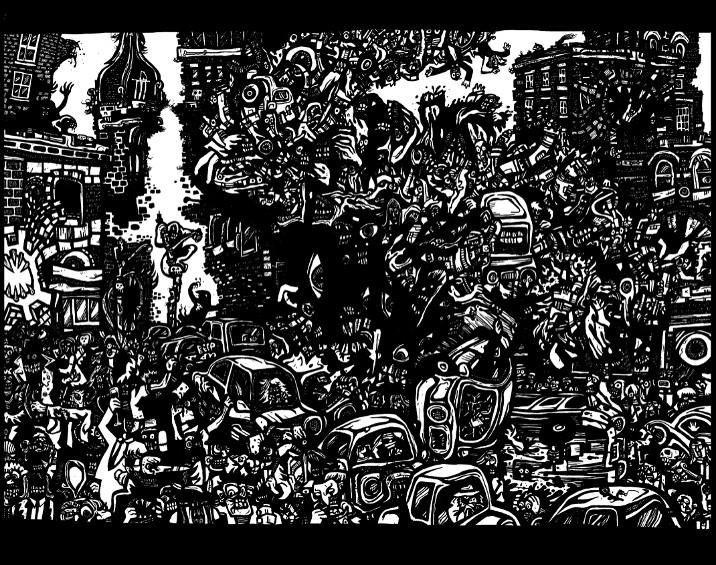 Rise of the Monster City!As the sun comes up the hum of electricity surges with to the sounds of alarm clocks, coffee machines, computers, and engines. The street lights dim while the stores and office buildings are illuminated. Traffic fills the vascular lane ways with cars and pedestrians alike. Phones start beeping, conferences buzzing, registers ringing and the city comes to life. The energy of all the machines, wires, people and buildings bounce off one another mixing and meddling in mesmeric routine chaos. By midday the metropolis is thundering with cosmic activity. Suddenly the lines between individuals and the entity become blurred, humans merge with machines and the machines with the concrete...and the concrete with the power lines. A new organism is born of the old... enter the City Monster!

First a conglomeration of city parts join together to from an enormous appendage. The giant shape although ever changing and amorphous somewhat resembles a human arm. The arm is lifted up from the ground grasping at the skyline in order to resurrect the creatures torso. Amidst the crowded piles a huge eye opens, then another followed by a tar filled mouth spewing melted concrete in every direction. The Beast stands upright the size of a small skyscraper and lets out a roar that can be heard all cross the lands. It is the people, the wires, the machines and the energy of the metropolis brought together as one, it is the City Monster!

“The City Monster” is a 30” x 40” detailed pen and ink drawing I made this drawing while I was working as a graffiti street art performer in Sept. 2005. I had spent the entire summer doing large live mural painting performances in downtown Toronto and was really inspired by all the people, events and incidents I had witnessed. Prior to this artwork I had been making a lot of single character weird face portraits and sequential transformation drawings. As the season came to a close I decided to add up all the techniques I'd explored in the more simple works to create this intricate street scene. The finished artwork took me five days ( approximately 50 hours) and remains one of my favourite pieces to this day. It is also interesting to note that I left one character blank in the lower left hand side and use this space to add a unique hand drawn face to each of the limited edition prints.