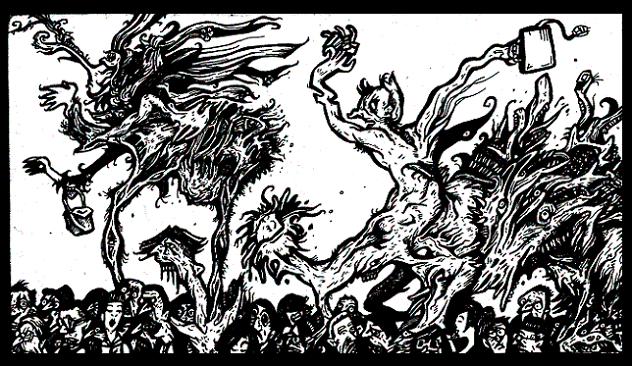 THE BRIDE OF THE WORK HORSE

Illustrated Fairy Tales!  Two young genetically modified steno-philes have worked their way towards an economically viable nuptial. He has acquired a magnificent beast-body, with minimal repercussions to his health, enabling a quick and violent rise to corporate success. She has broken into the fashion world with her unique “flower nose” and is quickly becoming all the rage in genetically enhanced outer-garments. Unfortunately the evanescent celebrations are perpetually interrupted by computer messages, teleconferencing, emergency business trips and en vogue surgical updates, thus postponing the event with disastrous results.

As each new day dawns the couple finds themselves hurdling away in opposite directions. The male galloping towards stock market equations, back room deals and back stabbing allies while the female makes it her daily routine to be made up, made over and made out to be something no one ever really is. Success surrounds the pair like an enlightened aura while they smile their lives away basking in the glow. Never stopping, never thinking and never held back by a care in the world.

Time passes quickly in their lives as it has in our own and before anyone realizes it they have peaked in respective fields. He sits a top a black corporate sky scraper swimming in electronic currency as he fends off aggressive upstarts with a devilish ferocity. She owns the fashion world making only the most luxurious appearances charging top dollar for her visitations and insisting the crowds partake in aphrodisiacs before appreciating her beauty.

However just as one rises most of us must also fall. In a brief moment of distraction the business tycoon is mortally wounded. One of his employees sneaks up from behind and impales an enormous silver spear into his left hip and proceeds to convince stock-holders that a demotion is necessary. Although somewhat distraught the man has little fear for the future having embezzled a great fortune knowing this day would come. He triumphantly exits the building thinking now only of his wife and the wedding long postponed they could finally enjoy.

The wife on the other hand already retired from modelling, as any self respecting 17 year old must, and was waiting at the alter for several years for the groom to arrive. Despite the passing of time she aged very little thanks to computer generated enhancements and perpetual plastic surgeries. Her heart too hadn't changed in the least and she was expecting a virile champion stallion to arrive and take her hand. When the retired corporate criminal finally returned home their fairy tale ended took a twisted turn.

Demanding a separation from her now aged and disgruntled groom, the Bride of the Workhorse, still dawning her veil, turns up her new nose and vanishes. Finding it difficult to move as he did before the implanted “secretarious” ( a surgically bonded secretary commonly found attached to yes-men & business big-wigs alike), the Workhorse, extra appendages and all, chases his lost love into futility, a slave to the busy streets & business deals, aimlessly trotting for the rest of his days and on into eternity…

This illustrated fairy tale was inspired and named after an ancient weird story by the great Lord Dunsany.