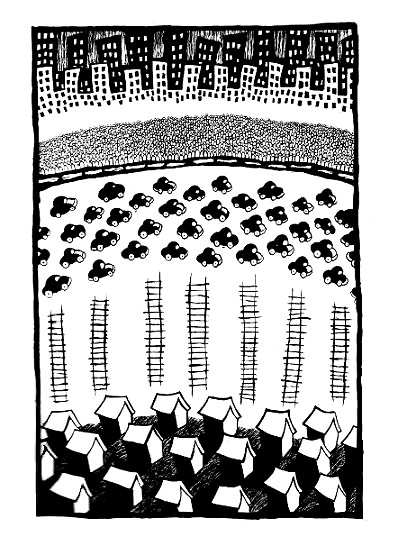 Surreal Dream City...With the rising the sun the city spirals from one unconsciousness to another. Alarm clock, appliances, vehicles and machines begin to sing an electric song as the people prepare themselves for another spin in the routine. Dressed in decorative disguises all the tiny citizens of the gear are ready to make their way through another big city day. From the little white box prisons to cars, trains and trollies the hordes travel in unison to their daytime positions filling the tombstone towers with what could only mockingly be called life. Soon the designated hours of skyscraper habitation will pass and the entire process is reversed. As the moon begins it's shift work they move from trollies to trains then automobiles returning to their boxes and removing their disguises. The night creeps in and a cyclical commute is complete as the city awakens once more from one unconsciousness to the next.

“The Commute” ( 6 x 8 ft. ink on paper) was a very personal piece for me at the time I was making this series. I was living in an east end suburb of Toronto and travelling back and forth to the city on a daily basis. My travelling time varied slightly as some mornings I would get a drive to the trains while other times I relied on the bus. The train ride also varied between 25 to 40 minutes meaning my entire trip could range anywhere from 1 to 2 hours one way. If you think about it many of us will spend a quarter of our waking hours simply moving back and forth as if in some surreal dream state. However I actually enjoyed this time and used it quite efficiently by working on small drawings, studying essays and observing the routines.

One of the most interesting things that I realized was how simultaneously organized and random the commute actually is. Despite the fact that most of us, myself included, follow a fairly strict daily schedule. Whether we are business people of students we always have to be at the same place at same time every single day. Granted this may change from Monday to Tuesday but is most likely to repeat itself the following week. So the strange thing that I noticed was that I almost never saw the same person twice or at least never frequently enough despite my regimented routines. That extra thirty seconds getting ready, some minor shift in the traffic or a new operator on the train, all these miniscule variations prevent the flow from precision. It almost felt impossible that with all these people driving, riding and walking in unison around me every morning that I could never find a pattern or discover the habits of anyone else. These observations created a strange sense of alienation but at the same time they also gave me hope. I found wonder in the chaos knowing we could never truly be controlled.