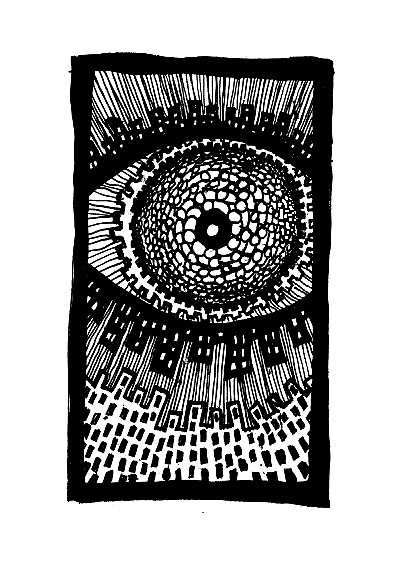 The Spiral City moves to the rhythms of routine, controlling conformity with necessities and ideals. In regulating each day to be exactly the one before the monstrous metropolis operates like a machine. The buildings take the shape of tombstone tower cogwheels while crowds provide the energy required to fuel the machine. Like a vertigo vortex the city swallows the individual whole transmuting each tiny life force into a misdirected conglomeration of anonymity and alienation. Lost in an endless and cyclical maze the expendable denizens race around in a frenzied peregrination to oblivion.

The “City of Gears” imagery was really interesting to experiment with. The symbolic likening of our daily existence to a metaphysical factory that creates nothing still resonates with me even though I started these drawings over 10 years ago. I felt it was a very striking metaphor and that it was the most accurate expression of my experiences at that time. Over time I continued to use this symbol and it evolved taking on many different forms. The energy and motion of the work changed many times taking on various moods and eventually the crowds became fleshed out filled with individual characters rather than blank faces. In addition to the fine artworks I also transposed the City of Gears into a comic book world using it as the set or location for all my graphic novels.

The aesthetic symbol itself was also very appealing. Despite being a tedious and labour intensive image to create, I never got bored of making these. There were so many possibilities using various camera angles, perspectives and patterns that I ended up drawing over 50 variations for my first exhibition. Most of these were small 5 x 7 inch works but there were several poster sized ink drawings and at least two larger version as well. It is also interesting to note that this was in fact the first symbol that I ever created. It was probably just a few months before I started taking black and white drawing seriously.  I painted a giant city of gears on the basement floor of my parents house. This first version used black, white and red a featured a giant eyeball in the center very much like the image on this page. My parents were very tolerant of my craziness when it came to art but I remember their frustration when they were showing the basement to potential buyers before we moved from that place.