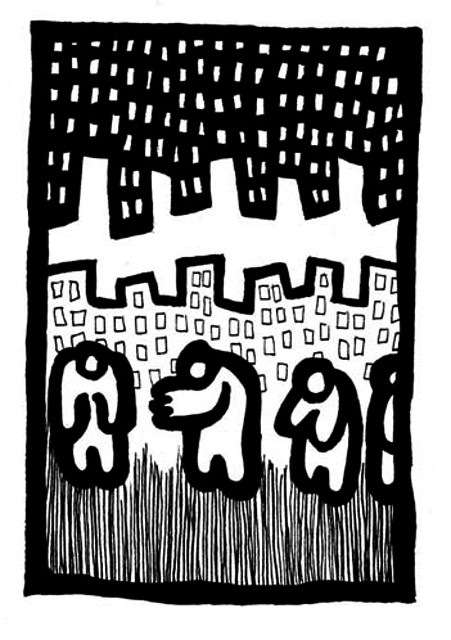 Simple Art City Ink Drawings. One by one the tiny faceless denizens march in unison through the streets. As if under some mass hypnotic spell each movement is perfectly matched. Every foot step, every gesture, every breath and every purchase perfectly timed to the routines of the city. Like a well oiled machine the tombstone towers turn into spiralling gears fuelled by the organized crowds. The roads, the sidewalks, elevators and escalators are the assembly lines processing greed, insecurity, alienation and superficial ideologies in order to produce nothing more than endless piles of waste. Yet despite this oblivion the cyclical activities perpetually repeat with each tiny faceless denizen playing it's role day after day.

This series of “HEY APATHY!” artworks was created between the fall of 2000 and finished approximately one year later. At the time I was living and working in a basement studio in an east end suburb of Toronto. As a result of my situation my visions of the city were very dark. There were very few means of obtaining information living in such a place and almost all of them were streamlined towards popular entertainment and propaganda. The book stores and libraries, movie theatres & rental shops and even the record shops were very limited and often censored. All the horror movies in our local rental shops were edited for TV versions and the closest comic book store (the only place with unchecked subversive ideas) was a reasonable distance away. These restrictions were also reflected in the people living in the suburbs who were either invisible or didn't want to discuss anything other than top 40 music and sports. It very difficult to discovery anything of interest without making a trip to the big city.

During my commutes back and forth to the downtown Toronto I started to notice these symbolic “rows of faceless people”. Most of the commuters were either business people or University students both of whom had a standard or uniform code of conduct and fashion and we all obviously operating around strict schedules. Although I was eventually able to discover all sorts of unique little corners in the big city, alternative book stores, underground theatres and dingy bars, these places always reminded me of the forbidden hops in Orwell's 1984 lost in concrete jungle of billboards, fashion boutiques and skyscraper business buildings. At any rate it was these experiences that inspired and influenced the bleak monumental and anonymous city depicted in this early simple art hieroglyphic series of ink drawings.