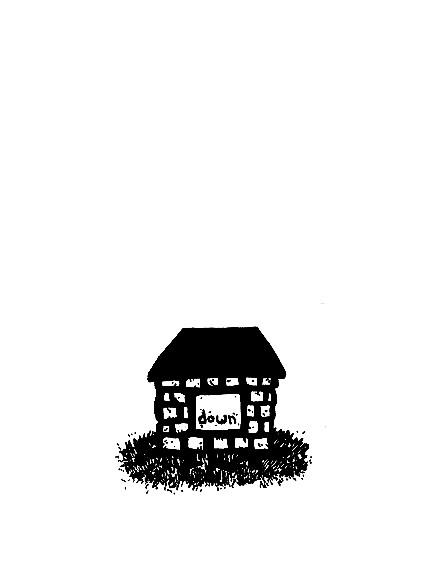 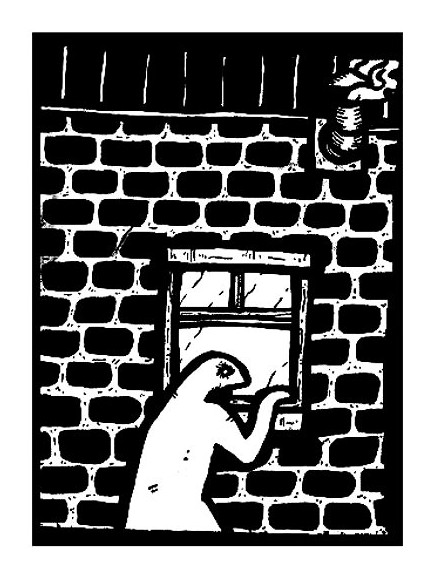 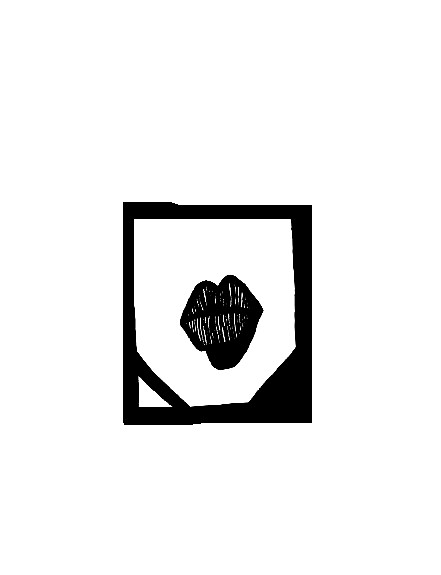 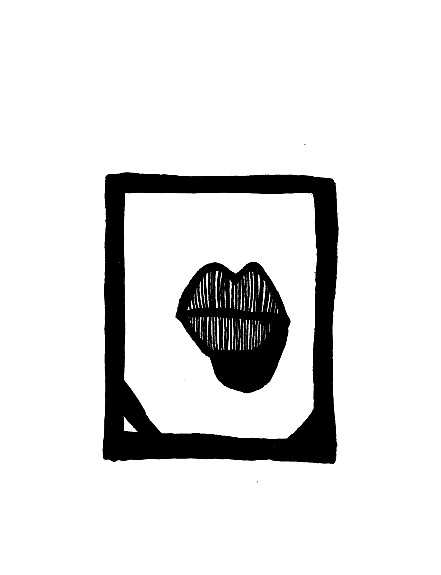 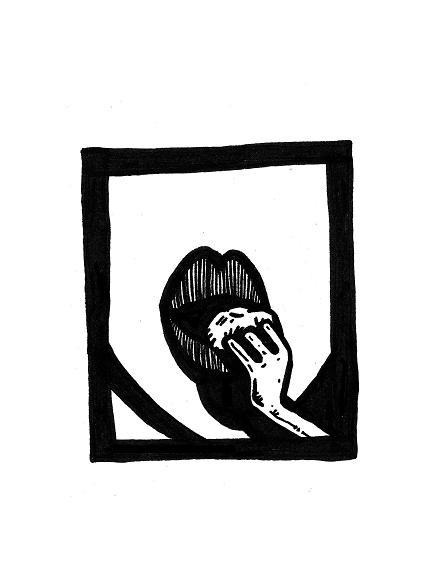 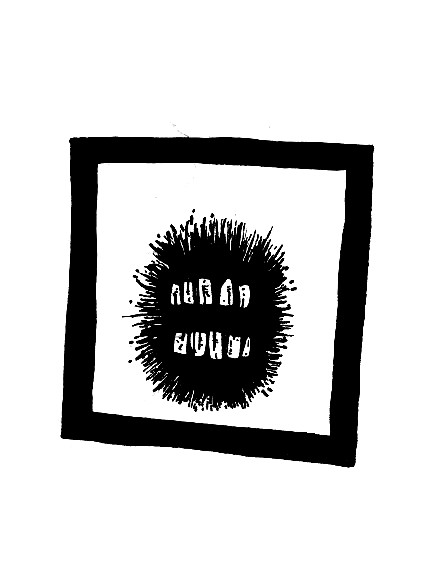 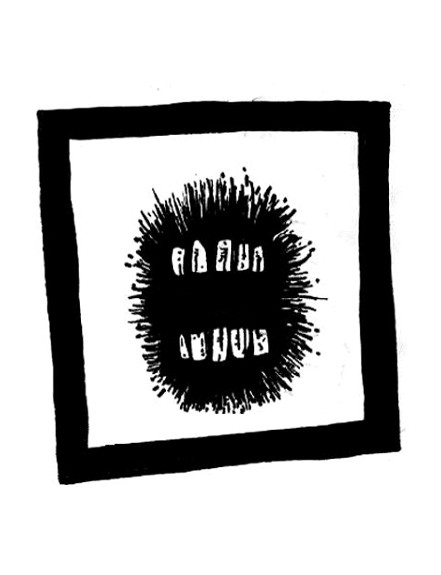 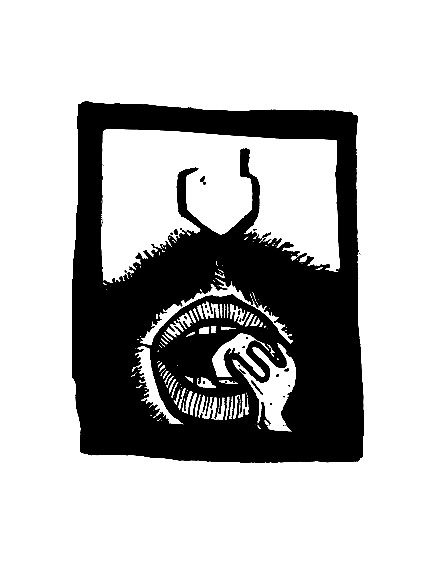 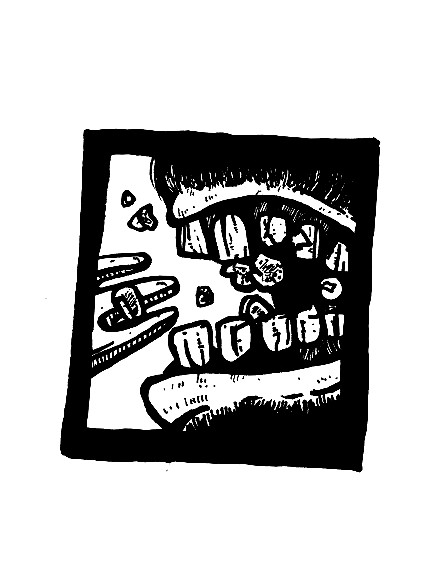 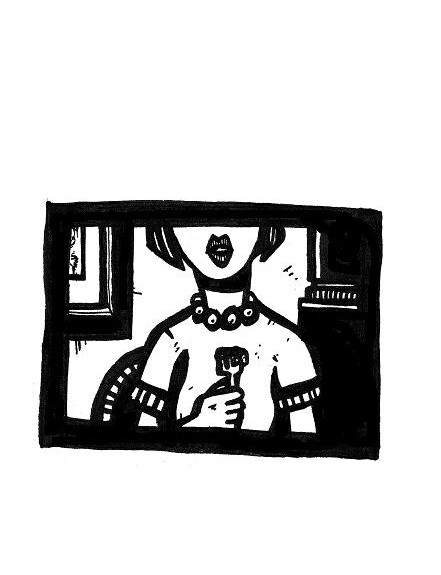 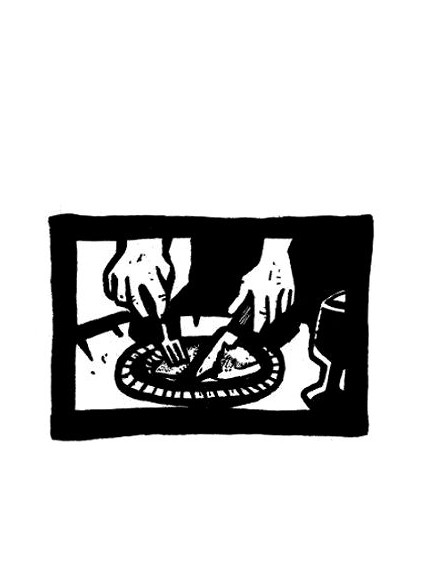 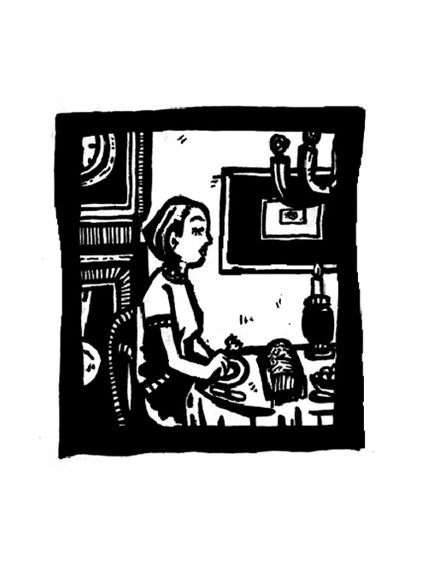 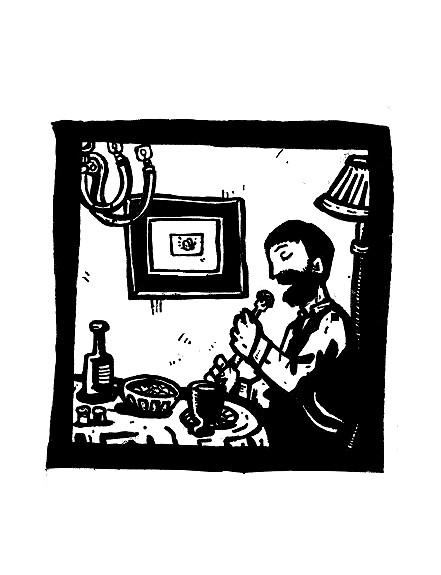 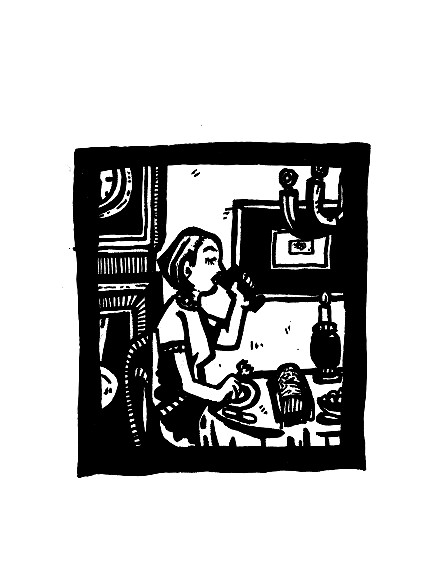 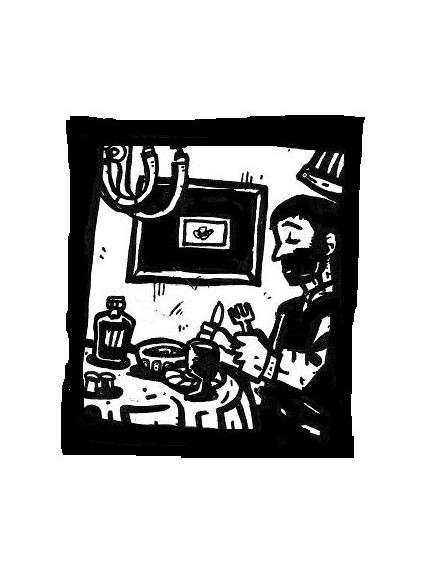 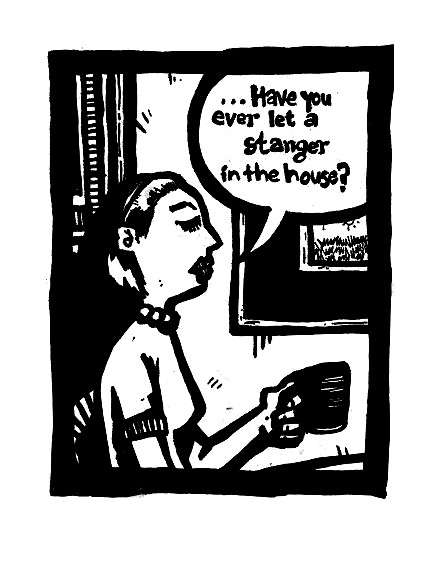 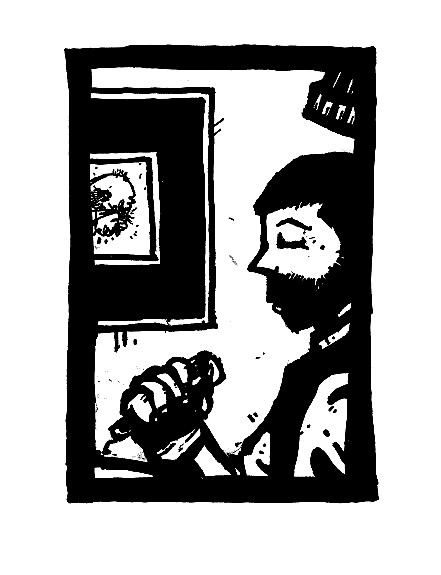 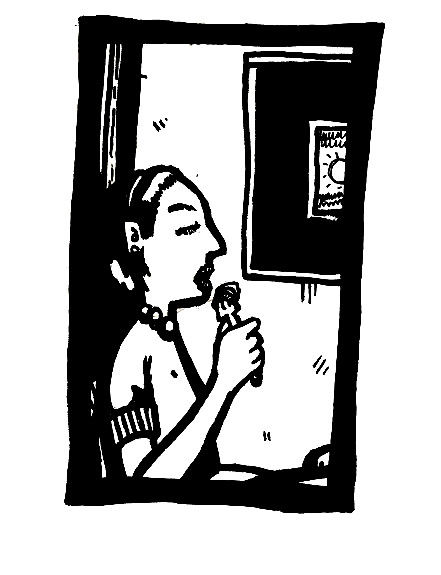 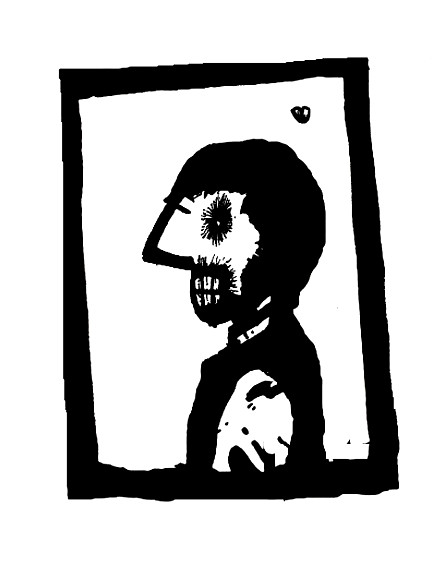 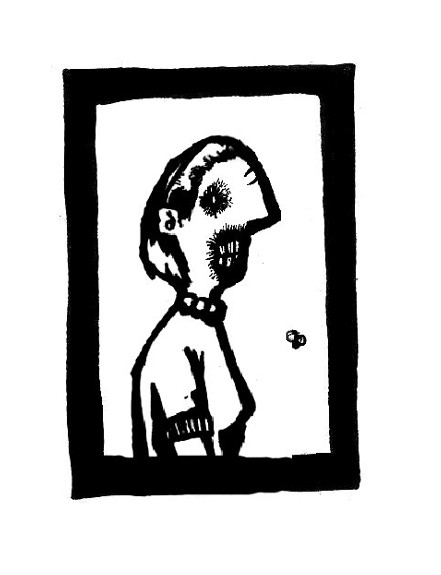 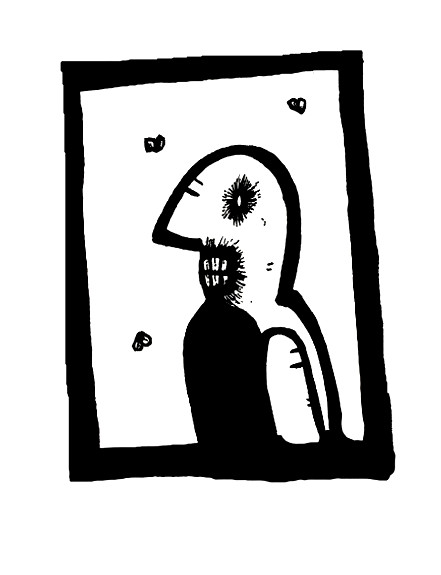 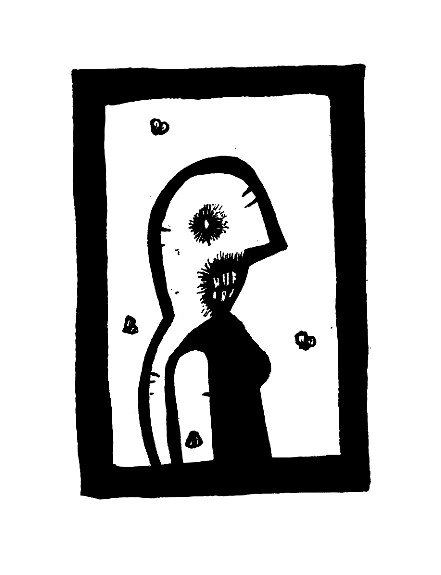 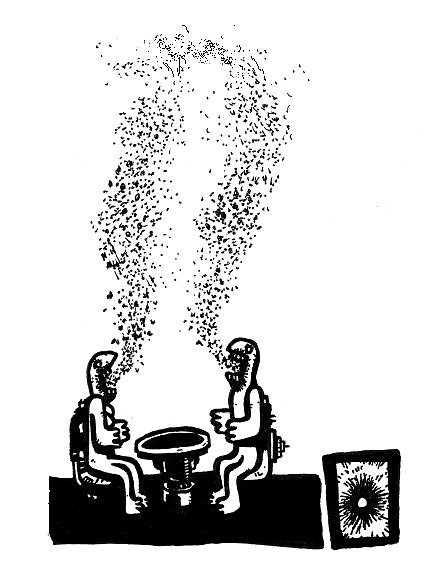 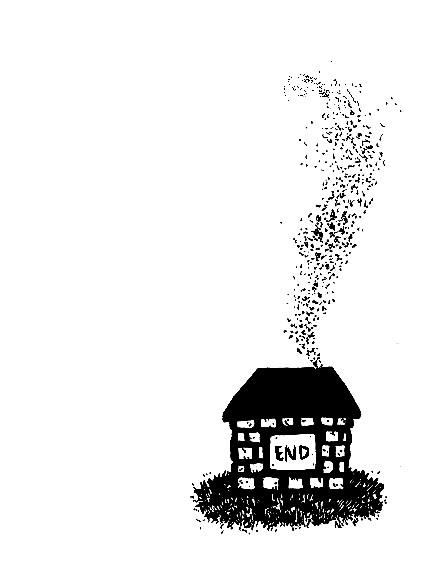 “Eat” A strange formless character approaches the window sill of a lonely brick house building. I inside the voyeuristic scene unfolds at a quaint yet fanciful diner table. Chewing and chewing the couple eats in near silence, save for the sounds of the meat against their teeth. How long has this been going on, how many years and how many meals. Suddenly but simply the wife speaks up “ Have you ever let a stranger inside the house?”. There is little hint of suspicion, nor even that of curiosity in her lank straight faced statement. The husband looks straight at her as though she was in fact the only answer and the food turns to flies and the couple revert from complicating human machinery into primal shapeless beasts.

Unfathomable occurrences in a world turned weird in this short scary story. Creepy humanoid creatures become interchangeable with human beings as our worst nightmares and factual certainty collide. The landscapes give way to an emptied white void and the air we still breath blow an infestation of flies. Routine become questionable and all sense and reason soon follows. A strange conversation arises at the diner table, a pedestrian becomes engulfed in a perpetual line, and the hospital of horrors seems to practice mistreatment. As the city devolves into a menacing mythology, the denizens grin with decoratively blackened orifices as they refuse to ascend and keep moving on Down.

The three part Down short scary story comics anthology was penned throughout my sketchbooks in the spring of 2003. Each of these surreal parables was made intuitively without scripts or preliminary drawings. Drawn directly with ink on the paper each subliminally oneiric narrative was intended as an exploration of the unconscious mind. However no matter how weird (or mundane) the tales presented themselves, I could still draw connections from the dreams to reality. Therefore the true terror of these unspeakable vignettes lies not in the horrific fantasy but in the peculiar critique the nightmares share with reality.

Featured as part of the 2003  series FLIES HOLES AND ROACHES, the Down comics were my first to explore both cartoon caricatures and creepy hieroglyphics in the same pages. There were 150 signed limited edition photo copy zines of each Down Book produced and distributed in the streets of Toronto and at various public festivals and comic book conventions. It is also of interest to note that the zombie like humanoids featured in these comics were originally designed a graffiti street murals which haunted downtown Toronto several years in the early 2000's.