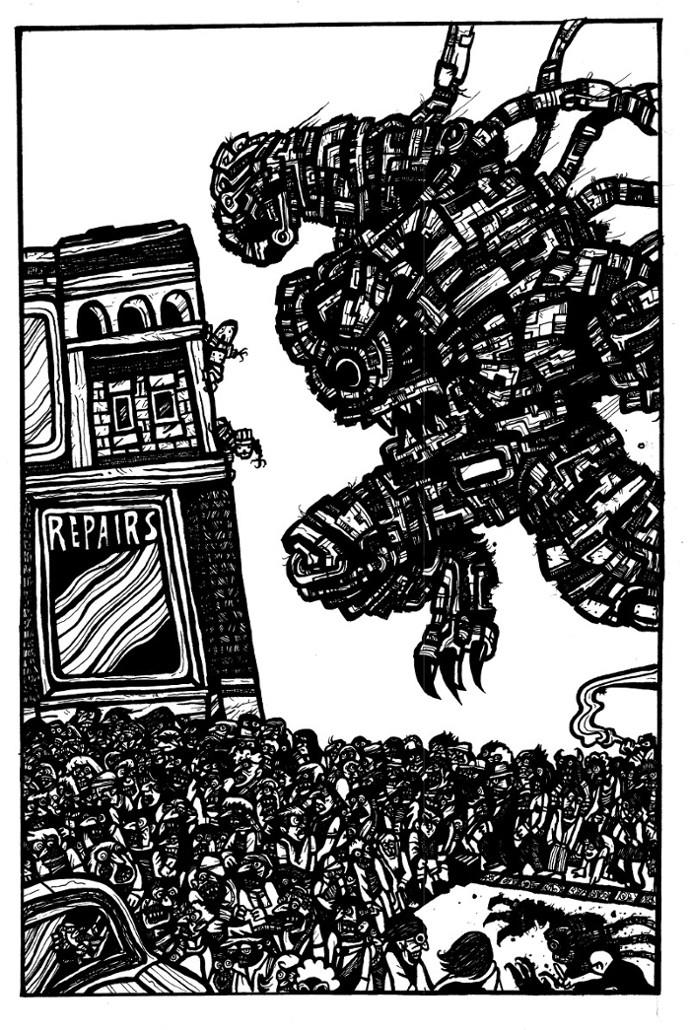 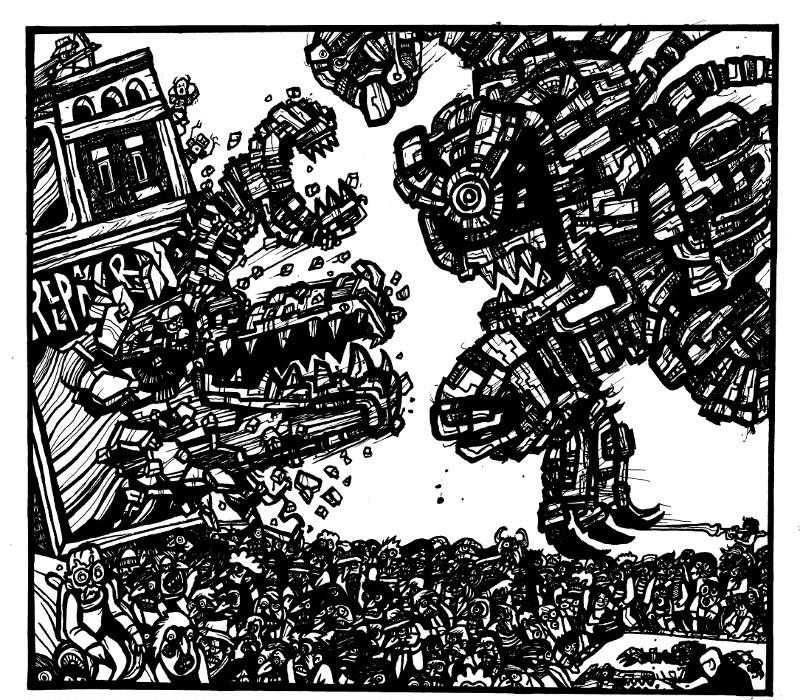 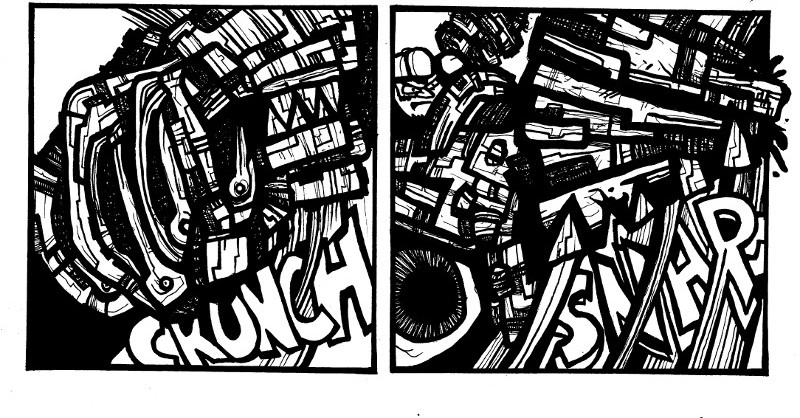 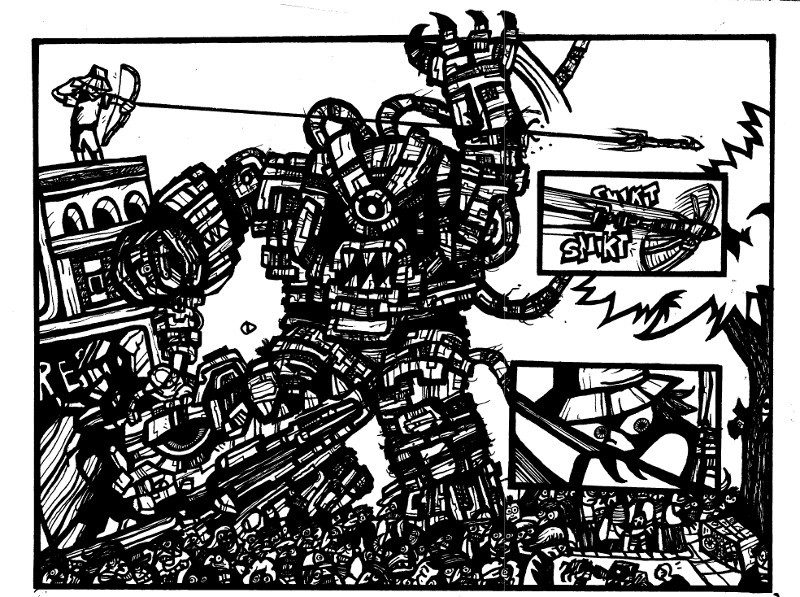 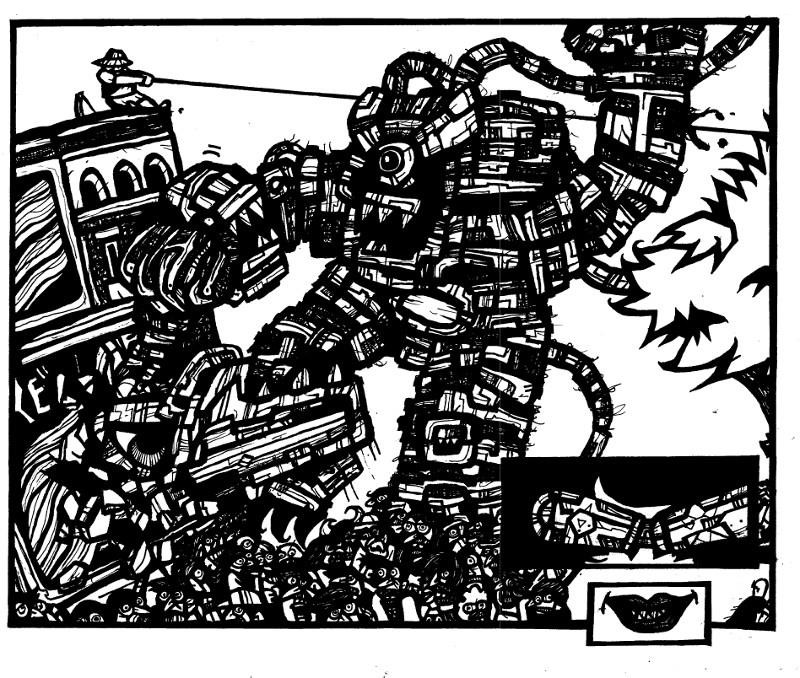 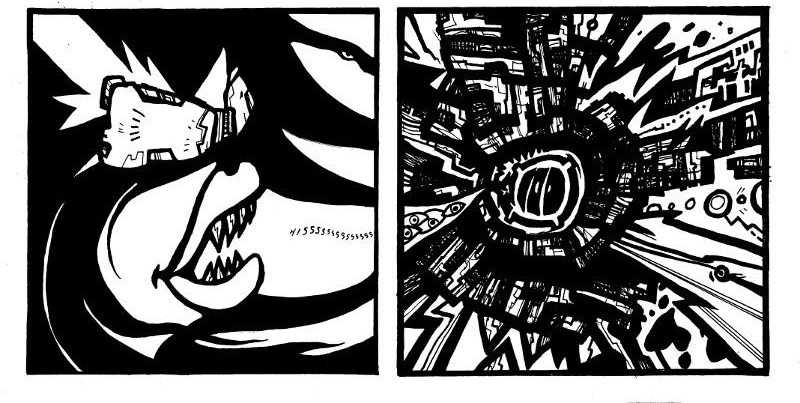 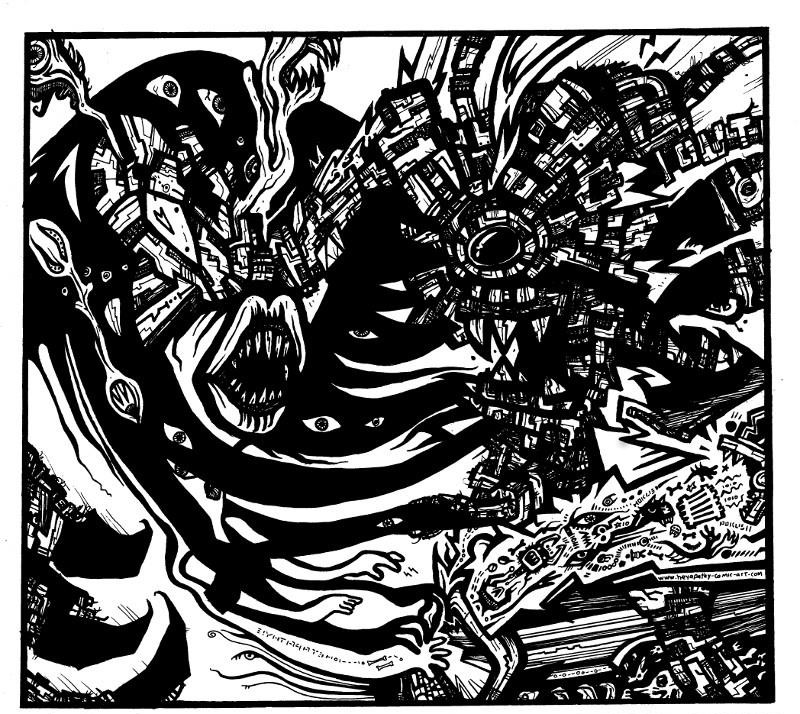 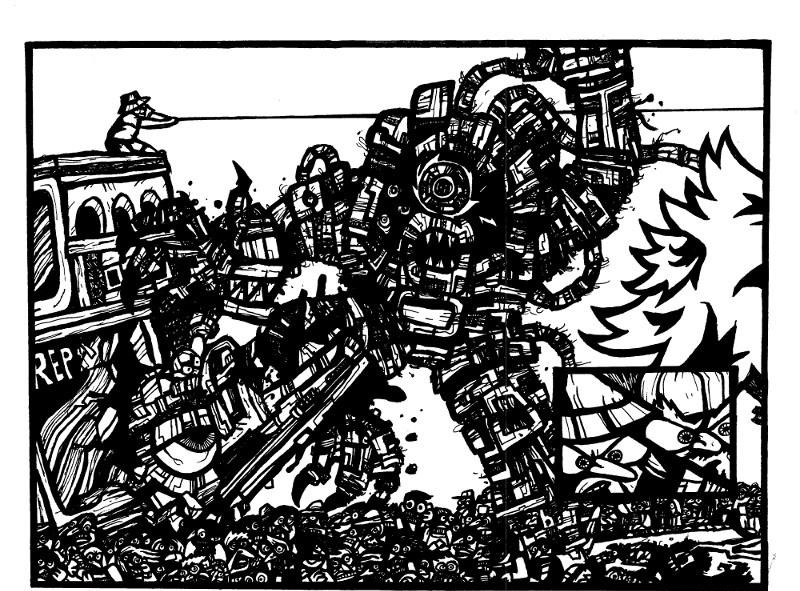 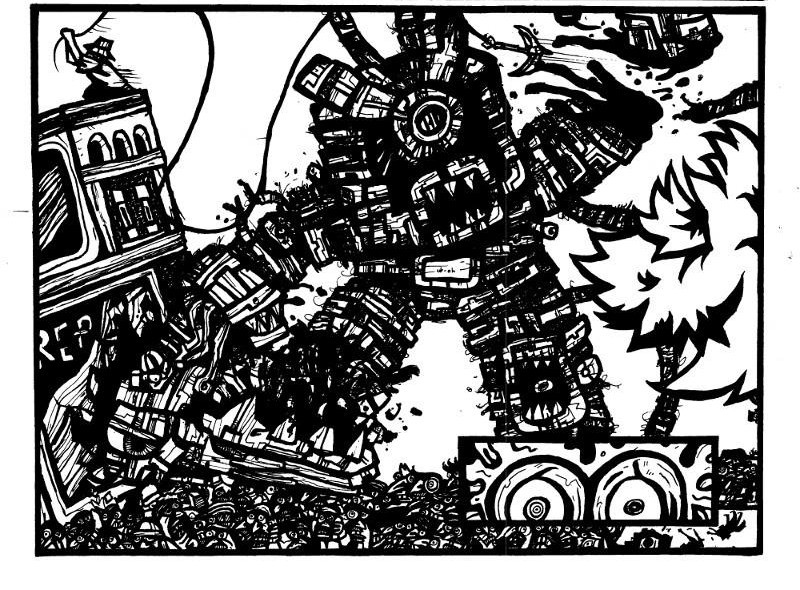 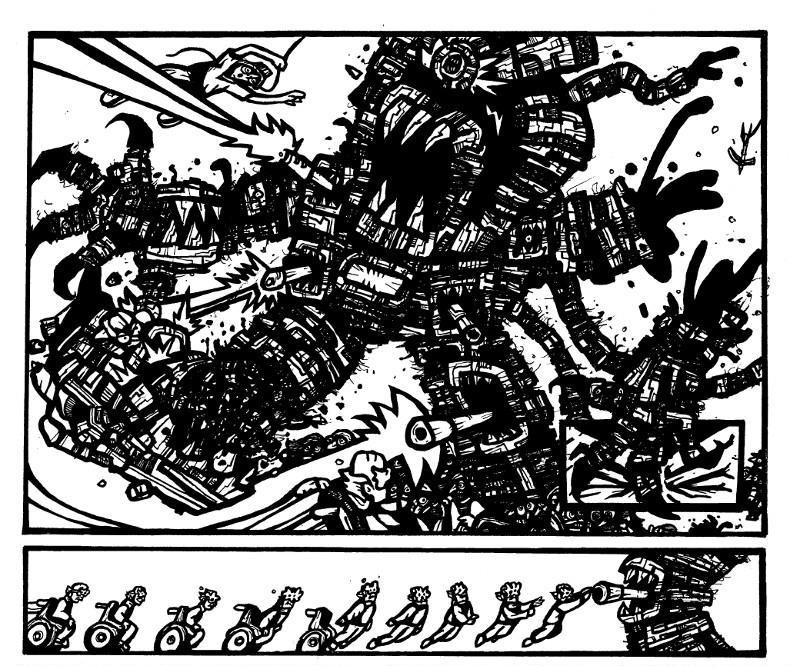 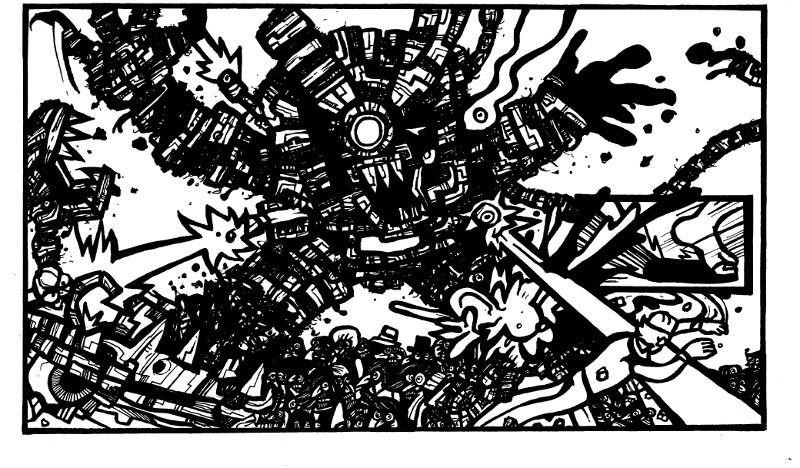 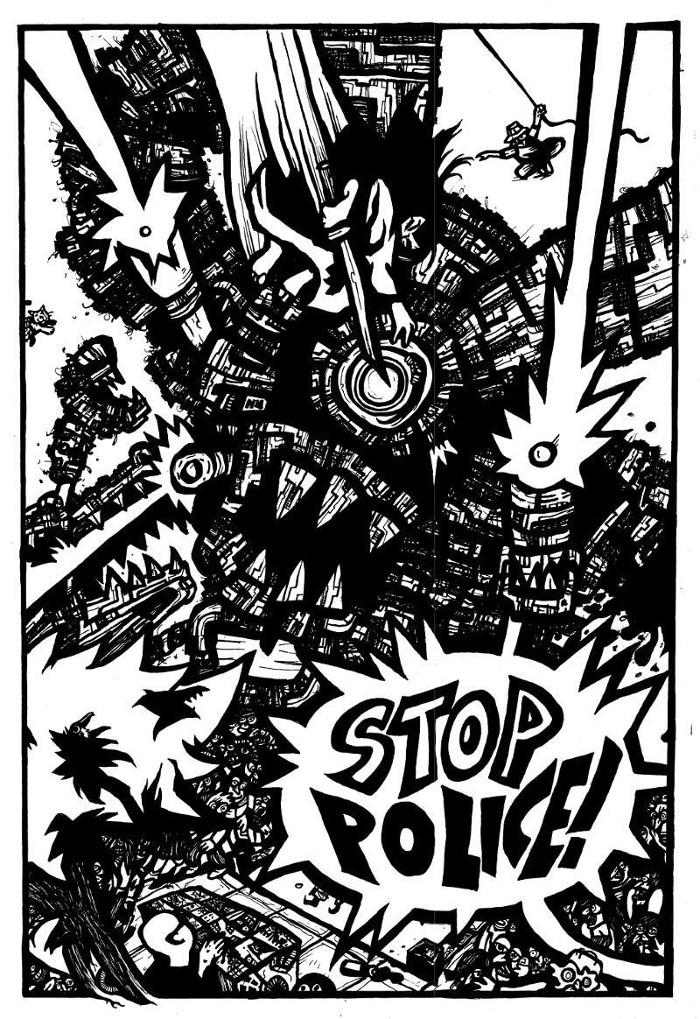 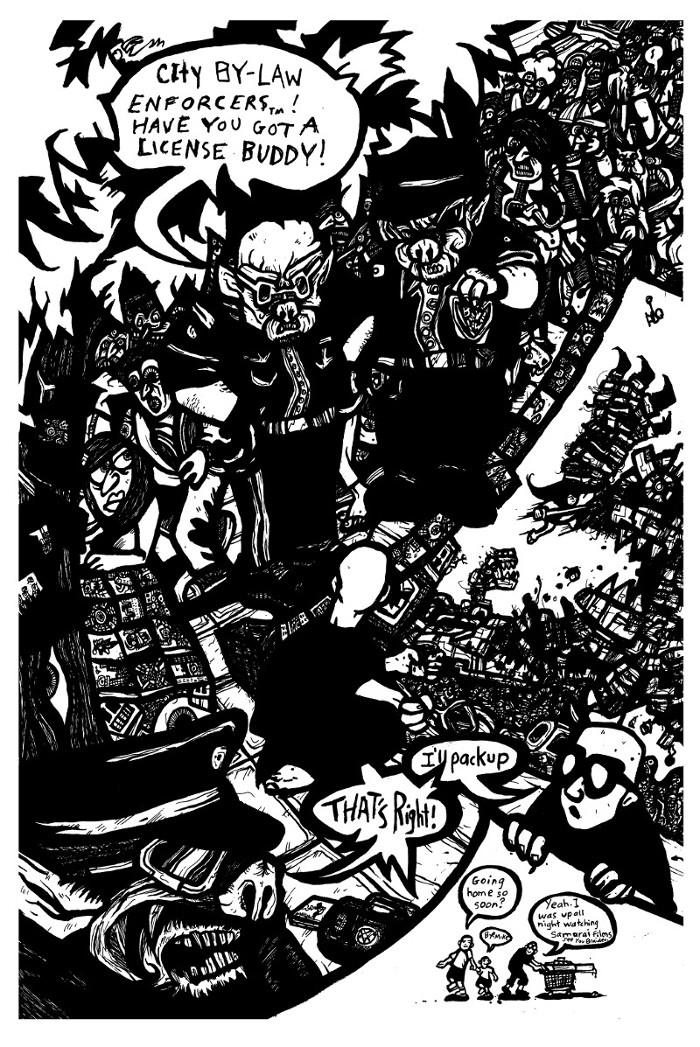 RONIN WARRIORS BATTLE! HEY APATHY! Book 2 Page 8! After revealing several strange fables, some of the history of the metropolis and it’s unusual law enforcement, a story about an artist that took place inside a fish and a group of rebel vigilantes standing up to a old fashion Robot Gangster protection racket, the whole damn comic climaxes in a massive Samurai Battle scene that took place right in the middle of my  street painting! What happened to all these weird characters? Who knows and who cares, I had to pack up my graffiti art and get the heck out of there because the City’s By-law Officers where threatening to seize my drawings and hit me with an enormous fine! Did you know that it is illegal to paint pictures in public but I am more than welcome sit there and beg for spare change?! I guess that’s life for you in the City of Gears!

"THE DEMONS OF THE BLUE GATES PORTAL RIFT PT. 9 (END)"

RONIN WARRIOR SIDE STORY: At the time of the attacks the city's top commanding guardians, Kazuo the son of the head guardian and his partner a man named Wellis, were returning to the city from a mission abroad. They were the most famous and respected of the Samurai but were known to be overly adventurous. This reputation had never caused any troubles and had primarily attached itself to the men when they were young and mischievous ronin warriors. However this characteristic was still in their nature although it manifested itself in more a more responsible manner. In their return trip they decided to take a slight detour and follow the rivers because the fishery was in good season. They could justify the scenic route by reporting on the fishing conditions while enjoying a more exciting peregrination along the waterfronts and small forests.

In many instances the pair might have been reprimanded for such an unauthorized trip however in this case their indulgences ended up saving the city from peril. While travelling along the river the Samurai discovered one of the portals and were able to interrogate a dying black wizard. The magician confessed of his role in the attack and warned them of the unexpected Ogre transformations. While they are generally the cruelest of beings in life, many black magicians show themselves as weaklings in their final moments as the fear of afterlife retribution draws near. With this information the Samurai made straight for the Blue gates while the rest of the guards were being diverted.

Their arrival coincided perfectly with that of the magic monks. The spiritualists were trying to force their way towards the entrance of the portal as dozens of Ogres smashed about all around them. Using a force field and powers of telekinesis the monks were barely able to move when the guardians appeared. The two warriors took to the beasts with skilled ferocity circling the monks and clearing a path. Despite the horrific obstacles and the threat of demise at the most miniscule error the Samurai moved without hesitation instinctively taking control of the scene. Had one not known better, as these men were truly masters, one might have imagined the partners were having a lot of fun.

It didn't take long for the monks to begin their chants while the swordsmen continued to dance in a sea of mutated Ogres. Blood and body parts splashed all over the place but none of the parties involved seemed to notice. Like the beasts the men and monks all worked intuitively and the scene unfolded like some sort of hypnosis. One hundred a twenty seconds later the portal was closed and shortly there after reinforcements arrived to assist in destroying the remaining Ogres. The other portals around the city had also all closed up seemingly without reason. The guardians speculated the wizards had either got word of their failure or had met with unexpected disasters like their partners waiting for the waters.

Shortly after the incident the businessmen responsible were arrested. They confessed to instigating the attack but had no recollection of working with any sorcerer. As far as they knew the portals had been a part of their water transportation technology though no evidence or records of such a thing exists. They also confessed to a number of unstable qualities to their original proposal stating that their transportation methods were fine in the short term but did in fact cause mutations to the water after extended use. In the end exaggerated accounts of the mutated Ogres became legendary among school children and the event was forever remember as the “The Demons of Blue Gates Portal Rift”.