ROBOT MONSTER …Wind howls blisteringly through the passage of time. With each step the darkness recedes giving way to an infinite opaqueness. Blazing snow storms fill the skyline like a solid white cube and the metropolis’ inhabitants are forced to retreat into hibernation. Thump, thump … thump …… thump, the heartbeats slow down to accommodate the falling freezing sensations. Once huddled in their cocoons, accepting the end of everything outside, the citizens begin adapting to the nothingness; a wire for an appendage, a plug for the ears, the sound of typing instead of breathing and steam replaces tears.

A time grows old the cold winds exit the tunnel and the dreadful minus temperatures are followed by a seasonal shift. The atmosphere changes from winter into summer and one by one the people start to wake up. A periscope is raised from an underground hideout hoping to confirm safe reentry to the world up above. The eye scans the surface in every direction but not a single person can be found. There are only monstrous machines scavenging, ravaging, junky and making terrible sounds.

The imagery was inspired by old science fiction radio programs that I found on an AM oldies station. The show was broadcast every Sunday night throughout the winter of 2005 so I took the opportunity to make weekly illustrations while listening to the strange airwaves. What interested me most about the programs was that, despite being more than 50 years old, they tended to be concerned with issues which remain prevalent today. The stories discussed problems regarding the environment, societal structure, class warfare, corrupt business and corrupt politics. The connections led me to consider the impenetrable nature of doom. If we have known about all these problems for such a long time why can’t we ever fix anything?

The robot monster drawings depict a number of creepy cyborg creatures. Each comic shows humankind as a mere component in the robotics suggesting that we might actually be preprogrammed pieces of a singular machine. This series of pen and ink artworks included 50 mechanized illustrations and a limited edition self published children’s comic book. These drawings were exhibited and sold at the Toronto Outdoor Art Exhibition and during my graffiti street art performances in the summer of 2005 however I have revisited the theme several times since. 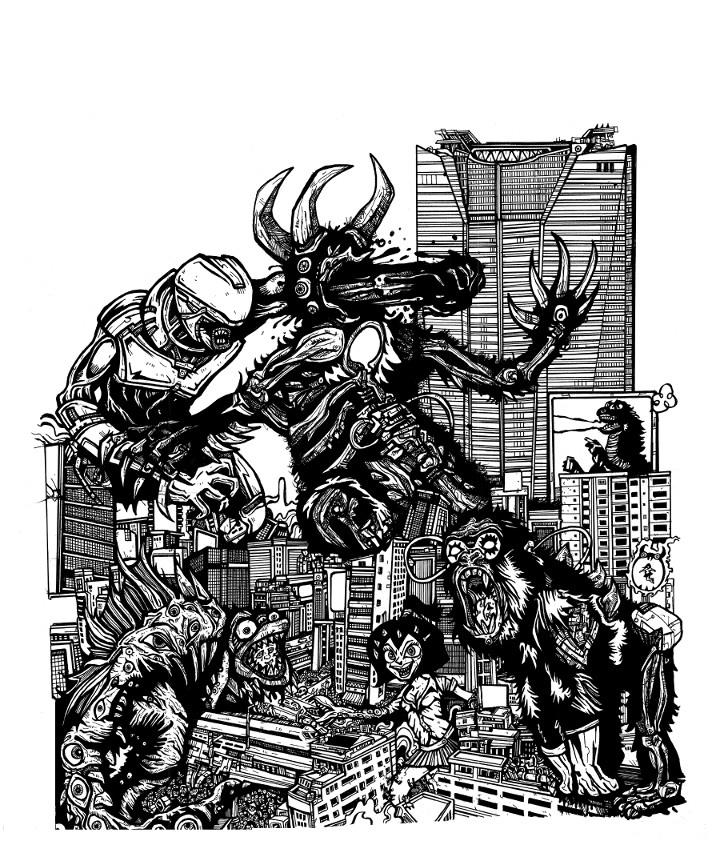