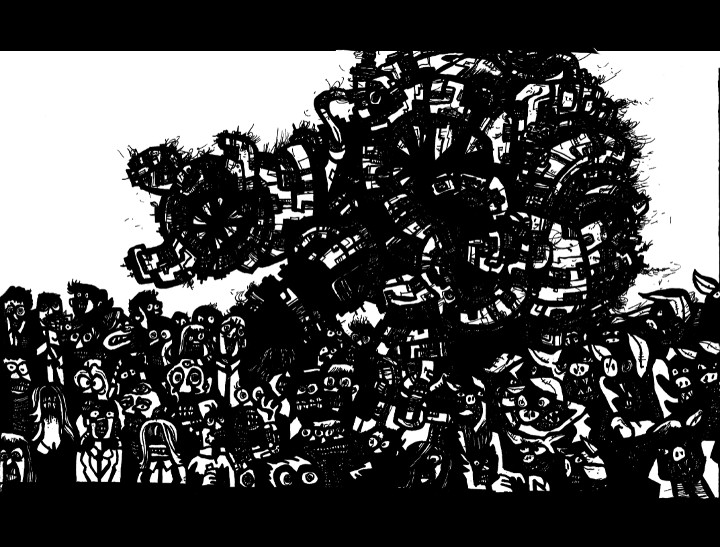 Robot Drawings! The grinding sounds metal on metal precede each thunderous stomp as the mechanical monstrosity marches through the streets. This particular surveillance Robot scans the city for deviant behaviours working with the technological tentacles in an attempt to assimilate mankind. Using it's rotating shark like teeth to intimidate and telescopic lens eyes the machine can sense human activity in an instance hone in on the targets. Once discovered the electric eel tendrils are released on the citizen. These metallic monsters latch themselves to the eyes, ears, hands and minds of the victims in order to reprogram them to conform with the masses.

After assimilation the cyborg half humans are easily monitor, controlled and become key word sensitive. A steady flow data diet of hypnotic distractions is fed to the mind keeping the advancement of intelligence and creativity to minimum. The use of vocal chords is also restricted as these man-machine interfaces permit telepathic text based communications. This useful feature is not only economic but it makes it easy to keep records on all conversations while limiting flesh interactions and dangerous emotions. It is of interest to note the pig like features of the crowd standing behind the creature in comparison to the human faces of those in it's path.

In addition to moderating the hosts intake of information and output of social interactions the electronic virus most impressive feature lies in it's talent for stealth. One would assume the blatantly open and aggressive attacks on civilization would cause a rebellion. Everywhere one looks there are extraterrestrial tentacles protruding from peoples faces, giant robots attached sending off subliminal messages and hypnotic blue lasers flashing across people faces, yet despite all of this the invasion has gone unnoticed. In fact it has been accepted by the majority as part of our everyday routines. Yes the ultimate genius of the mass manipulation is that it has been perceived as convenient, useful and progressive and thereby welcomed with open arms.