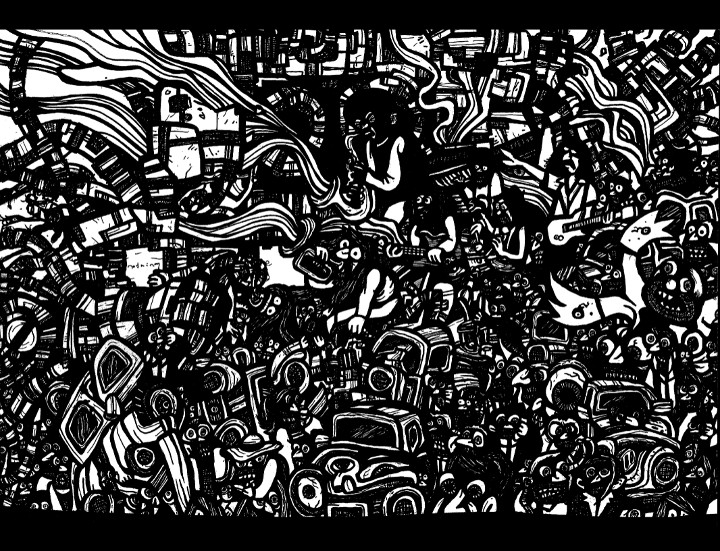 MUSICIANS VS THE METROPOLIS

MUSIC ARTWORK! The concrete, wires, machines and stressful routines collide to create a menacing force. Built up from all aspects of the noisy city a mechanical monster begins to take shape. Like a giant robot from an old monster movie this sentinel threatens to overwhelm the metropolis, stomping through buildings and crushing the streets. The City Monster grows to such heights with it's scraping metals it becomes almost unbearable and the city almost gives in. As the personification of our own urban nightmares it would appear there is no escape from this mecha-monstrocity and the doom that it brings!

Suddenly a sound springs out from the amidst the panicking streets. A sweet note from a saxophone sets the key to the Robot's destruction. A drum roll follows and the band begins blasting your favourite music back at the city. With a magical ferocity the harmonies take hold drowning out the deafening sounds of the beasts scratching bricks and bent metal. The rhythm grasps our stomachs and takes control of our feet, soothing the crowds into a groove moving forward to tackle the beast.

Although the troupe of superhero musicians initiate the retaliation from the sidewalks the sound waves move all throughout the city. Some people find the waves through headphones, or car radios while others through speakers in their workplace and homes. As it reaches the audience the sound presents itself in many different forms ranging from passive to aggressive. Yet regardless of the medium or the signature it is the music that becomes the message. The melodies guide us through the day suppressing the terrifying malevolence of the monstrous metropolis with the sounds of hope.

“The Musician Vs The Metropolis” was created while I was working as a full time graffiti street art performer in downtown Toronto. Every day I would head out into the city and set up a portable work station to do live painting demos while blasting music in the streets. I was always amazed by how much energy the music created whether it be my own stereo or one of the many talented street performers. I also noticed how often people used music to help them get through the day. There were sounds coming from every directions, stores, cars, headphones and bands and it really helped bring smiles to the people who listened. As a result I created a number of music artworks in which the role of the superhero was taken up by musicians to celebrate the power positive vibes of a good groove. 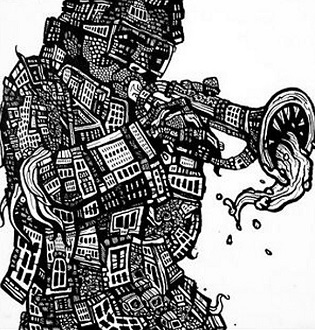 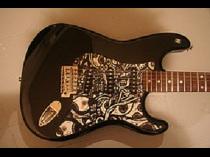