MONSTER DRAWINGS and ONLINE COMICS! Took a little time yesterday to make this banner for the weekly webcomics. It shows the four main characters: a Mad Scientist,his two twin surgical assistants and a Superhero who's seen better days ( or maybe it has always been like this?) Intrigued? Check out the comic, new pages every friday. 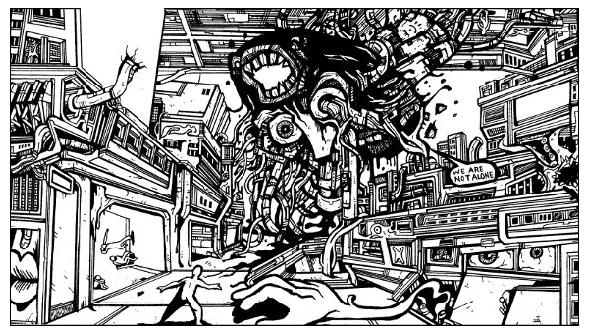 Ink Drawings! Did this weird cyber panel a couple of days ago but was to0 excited to work on this weeks webcomics  that I decided to wait until they were both finished before I started posting more art.

MONSTER DRAWINGS! Just got these 3D graphic test sequences opened after some problems with my file converter. Thanks to the financial support of the Toronto Arts Council I am currently working on a set of "Living Paintings" or animated loops intended for gallery installation.  For the "City of Gears" animation I am creating a dyptych expression comparing the  the city from a distance and from ground zero. The first part (from afar) features the faceless metropolis overcrowded by anonymous denizens. This film is being rendered in 3D by graphics wizard Laurie Ronne. I'm doing the companion piece, the city populated by all the crazy individuals, using the old fashion hand drawn stop motion techniques. MORE MONSTER ANIMATIONS HERE!

MONSTER DRAWINGS ON WEB TV! I did an interview for THAT CHANNEL'S Liquid Lunch with Hugh Reilly and Erin Ademoglu last Friday April 8/2011 (just got the footage today!). It was a fun opportunity to document some of my stories on video. I plan to edit more clips like the one here to put on various pages of this site. You can also check out the whole video on my Fashion Videos page. 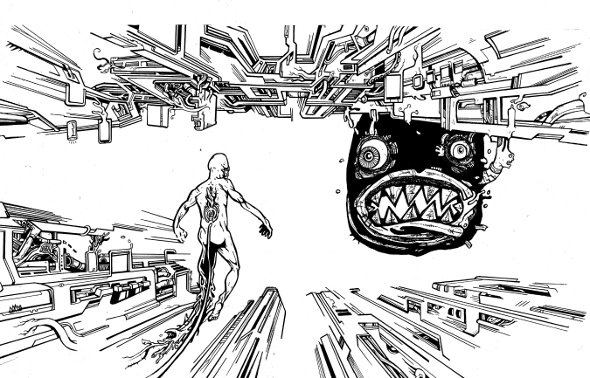 OH THE PAINS OF SINGULARITY! Can you imagine the terror of a world lived outside of our bodies and inside an electric screen?  Ghosts of lost information haunt these oddly illuminated circuit boards as one by one the citizens of the Gear succumb to the malevolence of a place they call Neuroberg...

HEY APATHY!  FASHION DRAWINGS!  Finished 13 all new clothing designs for the Spring season. I'll be adding the collection complete  with descriptions to the Fashion pages on this site soon. Here's a snazzy preview of the runway show...

CHECK OUT ALL THE HEY APATHY MONSTER DRAWINGS!