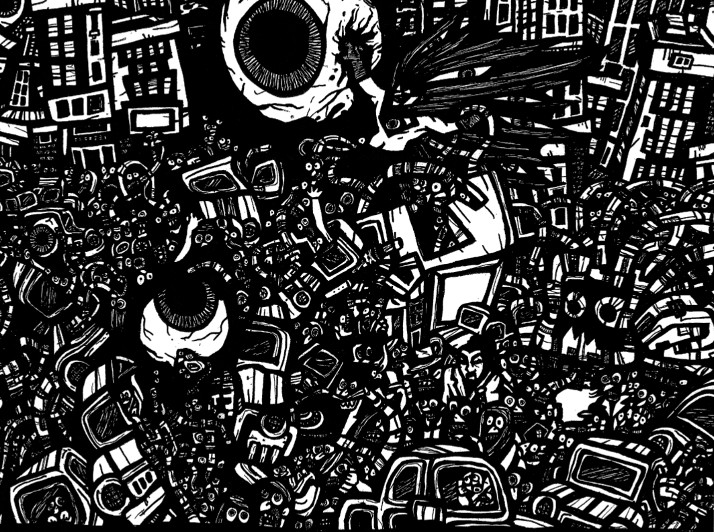 THE EYEBALL & THE HERO

They say that a giant eye is the window to the soul, so it is of little surprise that it was the first thing the extraterrestrial electronics attacked. The City of Gears spirals centrifugally around an enormous ocular, a mystical conglomeration of the human thoughts, ideas, hopes and desires located in the middle of the mechanical metropolis. Although most people never notice this surreal force it is known in urban legends to be the last hope for humanity in this increasingly cold and technological existence. Like the soul in many religions, this oracle helps maintain a certain degree of balance that permits mankind's unique facilities for compassion, innovation, emotion and socialization. While it remains questionable just how powerful the eye is seeing as how far man has fallen, few are willing to discard the notion that every little bit helps.

To say the least it might have been devastating when the eye was located by our subliminal enemies had it not been for the appearance of a strange little hero. The alien technologies started the assimilation in our homes and quickly moved out into the streets. Like futuristic leviathans the attacked the citizens with strange tentacles merging with our ears, appendages and minds. The tentacles came from the sky violently attracted to the crowded cities. They tore penetrated the flesh of almost every individual and became part of our routines. Despite the visceral horrors of the absorption the creatures moved with such swift stealth that not only did the people fail to notice but many of them willing partook in the invasion.

It was during these attacks that the enemy discovered the “Eye of the City”. At first there was some resistance but the eye was no match. Being a personified projection of the citizens own humanity, the eye was greatly weakened but the electronics already well established influence. The giant eye was torn apart breaking into hundreds of smaller eyes. Each eye was then captured, corrupted and attached to a robotic tendril to be used to further the mass manipulation. It was at this exact moment (so the legend says) that the optimistic energy of the eye escaped.

At another part of the city an unprecedented occurrence took place. One of the citizens began resiting the assimilation. Fighting back with all his heart he was dragged through the city by an enormous metallic tentacle. Some where in the midst of this terrible struggle a strange metamorphosis began. The energy of the eye was drawn to this little resistor and the two sought each other out collided and became one. Together a new hope was created and the supposed victim, born again with great strength. He broke loose from the alien grasp and took flight wearing a cape and mask adorned with the eyeball symbol, a new superhero to fight in these terrifyingly technological times!