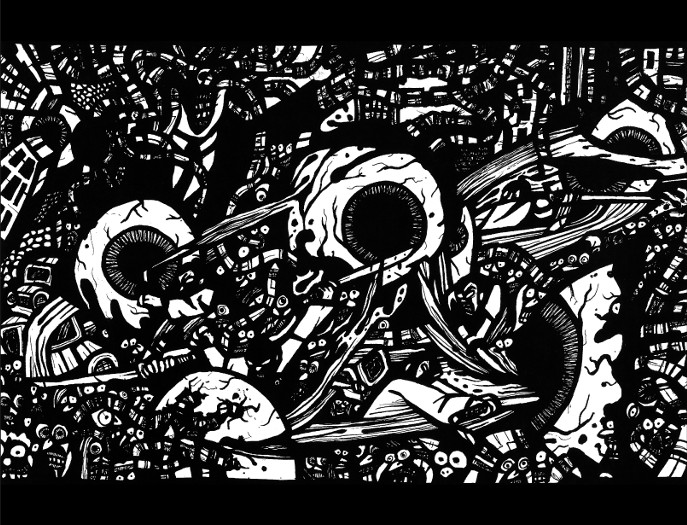 The future Samurai is surrounded by evil robot eyes but makes quick of the situation slicing them to pieces before have a chance to emit their deadly hypnosis! Having corrupted several giant eyeballs the treacherous business demigod unleashes his ocular minions on the unsuspecting public. The eyes, once a symbol of human thoughts, emotions and dreams, have been manipulated by massive technological tentacles. Endlessly spouting from the villains head these electronic cables resemble some sort of cyberpunk Medusa. Using strange hypnotic powers these serpentine robotic eyes move throughout the city twisting data and emotions in order to reshape society according to some diabolically perverse conformity.

In order to accomplish the assimilation the business demigod must not only create a controlled reality but is inclined to destroy anything that contradicts his master plan. In order to do so the robots are programmed to seek out any alternative ideas, whether it be art, music, politics, medicine or lifestyles and annihilate them. Despite the overall public acceptance of this mass intellectual genocide there are still many people who are fighting to retain a balance between the usefulness of the electronics and humanity itself.

One such warrior is the wandering ronin named Samura. Skilled in both the ancient martial arts and computer software development, this Samurai is a particularly deadly foe. Using his unique abilities the swordsman combines traditional and technological concepts permitting his intuitive senses to rise far above that of any normal man. He is one of the few who can see through the subliminal manipulations behind the computer world and is able to instantly distinguish his own thoughts from those implanted by the robots. As a result he is left to wander the streets alone battling the ominous eyes wherever he finds them and especially when he sees situations where they have gone to far...

“The Samurai Vs The Electric Eyes” is part of a series about the mythological City of Gears. The stories revolve around various characters including regular people and superheroes as they try to cope with a world run by machines. The Samurai has also been featured in his own graphic novel as well as in many large scale graffiti street art performances. 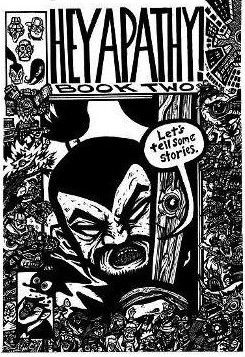 A Ronin Warrior does battle with giant robots in his quest to destroy an evil eyeball!