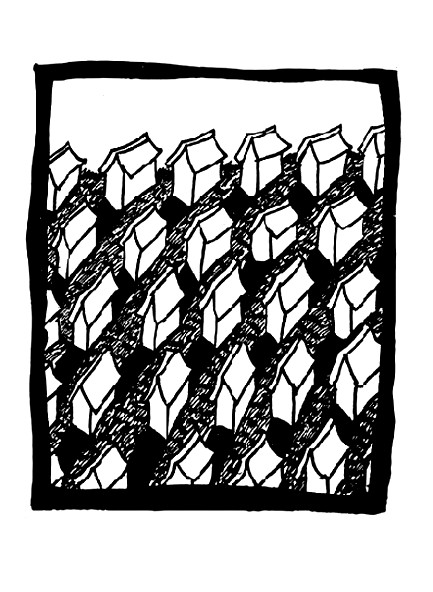 Drawing Art "The Little Box Prisons"...Row by row the little box prisons are built. Each one is identical in it shape, size and colour and each one is housed by identical tenants. Sprawling across the land in every direction the multitude uniformity offers a mesmeric view. With perfectly groomed grass placed between gridded roadways the structures are organized with hypnotic repetition. Hidden wires and pipelines connect each of the units providing the necessary information and removing the unnecessary waste. Each solitary structure is managed with the utmost of ease leaving no room for creativity nor for deviant behaviours. Of course what goes on inside these blank boxes is not always as streamlined as the outwardly appearances but there is a certain tolerance given to things we can't see.

“The Suburbs” was a part of my first “Hey Apathy” drawing series. There were two versions of the work, the smaller pen drawing shown here approximately 5” x 5” and a larger ink on paper piece approximately 5 ft. X 5 ft. At the time when I was making these artworks I was living in an east-end suburb of Toronto and was commuting back and forth to the city for my studies. Although I still felt the city was a cold an anonymous monstrosity, there was something exciting about the possibilities such a busy place offered.

In contrast I felt the suburbs had become increasingly desolate as I spent more time in the downtown core. The endless rows of identical houses were meant to express the feelings of isolation and confinement I experienced in the suburbs but I also wanted to include some sense of serenity as I realized many people find the environment comforting. As with most of my artworks I always try to explore both sides of any story which is one of the reasons I chose to work exclusively with black and white.