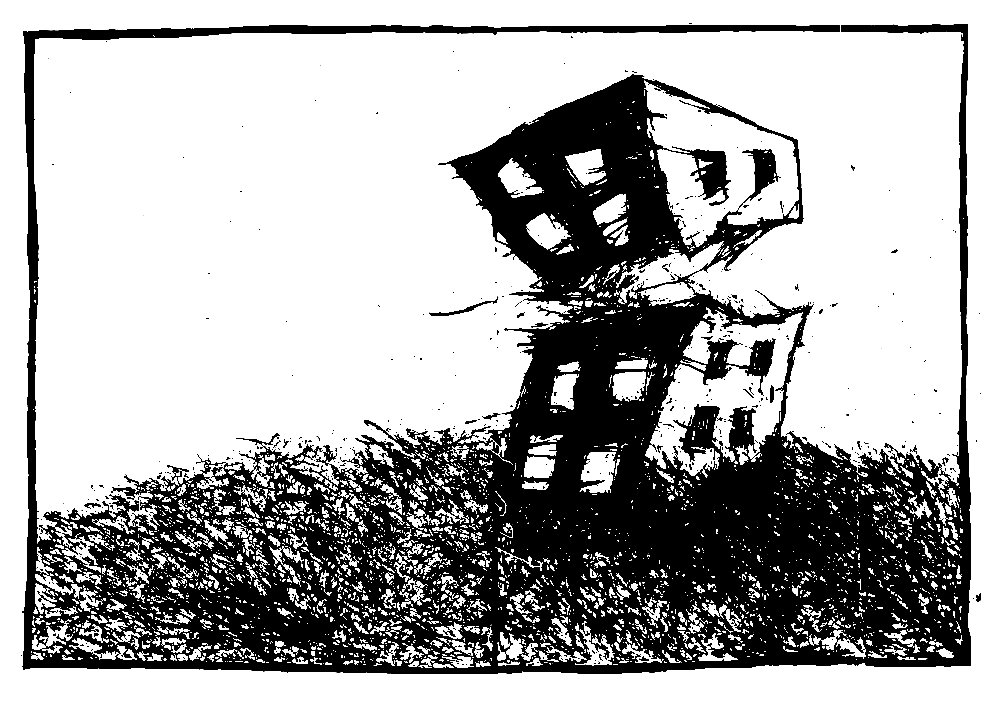 City Dreams of the Apocalypse. With immeasurable speed and strength a strange invisible force smashes through the metropolis. The blasts tears through the towers savagely tossing the pieces into oblivion. The endless crowds of anonymous denizens are hopelessly washed away like grains of sand in the tide. The once monumental and all powerful tombstone city is defenceless in the wake of this ultimate terror. The scene unfolds as a visceral spectacle not dissimilar to the footage from the old nuclear test films annihilating the entire urban landscape in a matter of moments. As the last giant skyscraper faces the ominous attack it almost appears to be come to life. The building is torn in two creating an enormous gaping mouth screaming at the chaos with shattered window eyes filled with anger and sorrow.

“The Apocalypse” drawings were part of my first series of “HEY APATHY!” artworks. The entire collection included over 300 ink illustrations ranging from 5 inches x 7 inches up to 10 feet x 15 feet. The imagery was divided into two parts. The first set described a metaphorical city of gears made up of tombstone like towers and endless hordes of faceless people disappearing into the horizons and the second set showed this same landscape being destroyed. Together the symbols are meant as a warning revealing the despairing psychological state of our modern cities and predicting the eventual results of our unsustainable existence. Although many people have compared this image to the destruction of the twin towers on Sept. 11 2001, it is important to note that these drawings were created almost a year before the attacks. While the works were intended to be prophetic, my concerns were much more surreal and varied including environmental, war torn, and psychological apocalypses rather than any singular event.

The themes were also reflecting in the technical processes. I made all of these drawings using a hand carved bamboo quill pen and black India ink on white paper. The meticulous rendered nihilistic graveyard city scenes were constructed using literally thousands of tiny circle figures and could take more than a week to complete a larger drawing. The apocalypse scenes, on the other hand, were created spontaneously using the same tools to attack the paper with an almost performance like pace. A giant mural like the one featured on this page could be completed in 15 – 20 minutes. Symbolically these artistic approaches represented the intricate and expansive construction of real cities, all the people, the planning, the work and the lives in comparison to the inevitable frailty of our concrete castles when compared to threatening forces.