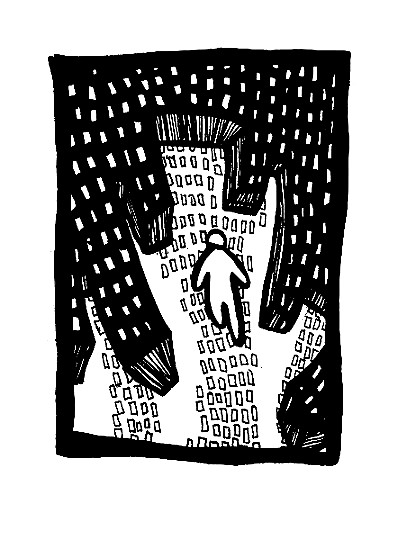 A City Dream, The side of the skyscraper suddenly disappears. The gridded skeleton dissolve sending rectangular sheets of glass out into the sky. The floors moves backwards and the city turns upside down and we find ourselves alone a floating in between the clouds. In this euphoric state nothing seems to matter, there are no rules, no regulations nor reasons. Lifted into the air all sense of self is forgotten as if the weight of existence has escaped putting us out of gravity's reach. Floating or falling becomes the same thing and nothing becomes everything as we too suddenly disappear.

The “Floating” and “Falling” people were a big part of this HEY APATHY! 2001 series. I used the imagery to express the dark sensations of alienation, the loss of control as well as a more positive feeling of escape. Some of the drawings depicting people falling in endless rows while others had the characters scattered all over the horizon. It was interesting to compare the aggressive nature of the linear compositions with the freedom of the more random arrangements. In these instances the work really exemplified a shared sense of alienation and loneliness with others.

In many of the works I also used lone characters which had the effect of making the viewer relate with the artwork and helped to define the endless bubble people featured in the larger ink drawings. It was also kind of interesting that some of this images really didn't have a top or a bottom. Although a few were defined by crowd scene many of them could be hung in any manner. The direction would often dictate the feel of the working changing the sensation from floating to falling. I drew approximately 50 variations on the theme ranging from 5 x 7 inches up to 6 x 8 feet. The symbolic falling/floating person also continued to evolve through out my later artworks and can often be found in my graffiti street art paintings. In these works the falling person is generally a fully detailed cartoon character checking his or her watch and talking on a cell phone while flying through the sky.