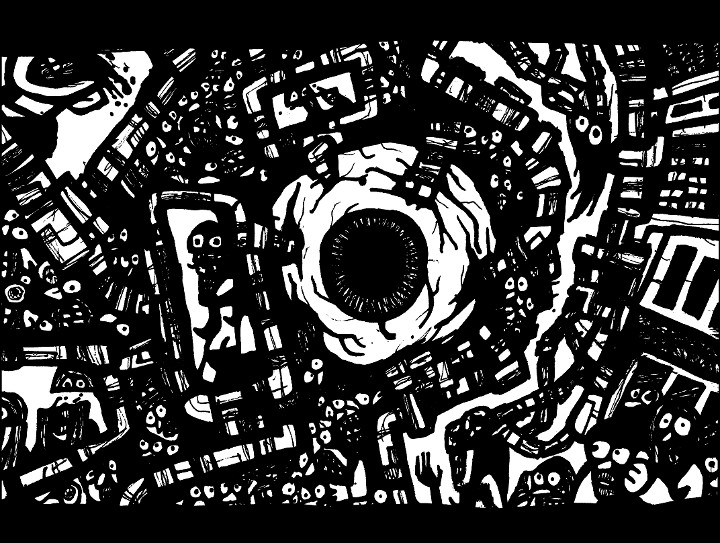 EYE OF THE CITY

Cartoon Eyeball of the Machine Metropolis! The buildings form the shape of an enormous gear while the people provide the energy to make the city spin. In the middle of the metropolitan machine lies the giant eyeball of consciousness. An immensely powerful metaphysical ocular comprised of all our thoughts, goals, actions and dreams upon which the centrifugal force of the city rotates. Despite being surrounded by destructive ideologies and twisted technologies the eye continues to maintain some sense of balance preventing the city's collapse. Although robotic tentacles are attached to the eye and hypnotic billboards send messages in an attempt to corrupt all vision, somehow the eyeball never loses it's way.

“The Eye of the City” is one of my favourite symbols and was used in many of my graffiti street art performances. The primary or introductory concept behind my imaginary City of Gears is that the metropolis is like a machine but we are the ones who determine how that machine works. I positioned the giant eye in the middle of the drawings to exemplify this idea. Quite often people would ask me what the eye meant and it was very easy to explain my theory using this design. I'd always tell them that the eye was the human factor and that despite all the bricks, wires and busy distractions of the big city, it is always the people who are the center, responsible for the all the activities around them. I liked to use the drawings to point out the differences between what we perceive as “the big city” and the street level reality that the crowds really consist of a multitude of individuals.

Using this cartoon eyeball theme as my conceptual background I have created an entire mythological universe involving superheroes, Samurai, Alien Technologies and weird tales to express my concerns and observations regarding the real world we live in. This drawing is part of the series entitled “The City of Gears”. The complete collection consists of approximately 30 pen and ink artworks ranging from 11” x 17” to 30” x 40”. Many of the images created in this set were used as the basis for my live mural painting demonstrations.