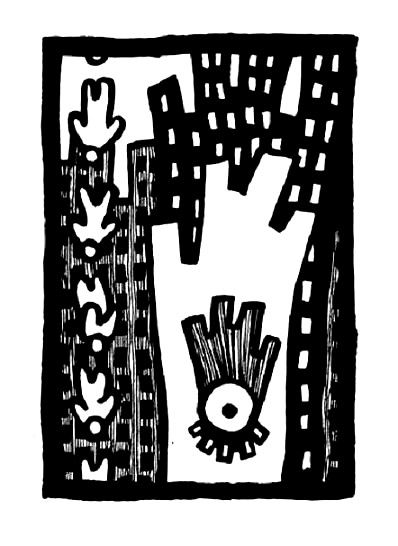 One of the prominent cartoon art symbols I used in this series was the “Falling People”. When I started drawing these characters I wanted to express a sensation of being lost and wanted them to appear somewhere between floating and falling. The idea was to separate these lone figures from the crowd but not from the alienation. While these characters could be seen rising or falling above the hordes there is little in the symbolism that signifies escape. Instead these figures serve to bring a vertigo anxiety to the work and allow individual onlookers relate or find themselves amidst the otherwise unidentifiable crowds.

Although it became very easy to associate these images with the events of Sept 11, 2001 it is interesting to note that I started drawing this series almost a year prior to the attacks. As mentioned above my intention was to illustrate a surreal state of mind and not any literal act of violence. I made over 300 of these small illustrations as part of my daily routines while commuting to and from college in 1999-2000. I had about an hour on the bus and subways and was fortunate with both my schedule and location that I almost always was able to get a good seat and make use of my time.

At first I filled up a small sketchbook and then I started cutting up nice paper and making more refined works. I found a whole bunch of cheap 3 x 5 inch frames and would arrange them like drawing boards with the paper on top of the glass. In the end there were around 200 of these mini drawings framed for exhibition which I sold out within hours for $20 each. In addition to the small works the falling people were also included in some of the large murals, drawn all over the city as a graffiti street art figure and made into a number of hand drawn animated cartoon art loops of these characters which I still use in many of my exhibitions to this day.