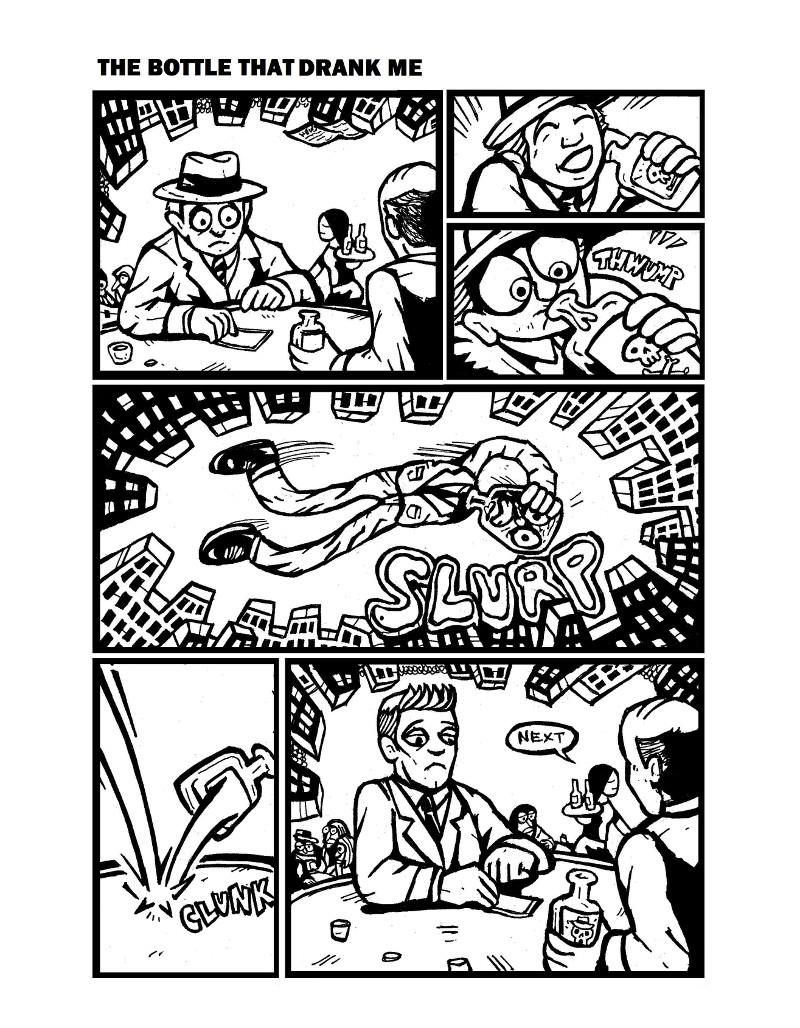 BLACK AND WHITE COMIC "THE BOTTLE THAT DRANK ME"

Black and White Comic background stories and inspirations... It is almost uncanny how powerful such a socially acceptable and common place narcotic called alcohol actually is. While many of us can take or leave the addictive substance or use it only for certain occasions it has been my experience that within a few short degree of separation everyone has been affected by it in one way or another. Whether it be a family member, a friend, an accident or a bad decision, I'm sure you can too can find at least one negative example of alcoholism causing problems in your life. On the other hand, I have also had a number of great times at parties, sitting in pubs and even relaxing with a drink so it becomes difficult to talk against it. However it is obvious that despite all the pleasures alcohol has destroyed far many more empires than it has created.

When I was a young child I had this really cool uncle. One winter holiday we went to visit him in Montreal for some skiing and cottaging. I remember his giant condo in the city that we drove to in his Porsche. The 3 floor apartment was right on the waterfront and the back sliding doors opened up onto a small patio with a speed boat docked on the lake. He lived there with his beautiful young french girlfriend. After skiing near the city for a few days we hopped in his enormous jeep and drove off into the forest to spend a few days at a luxurious cottage. The place was enormous and extravagant complete with a hand carved wooden spiral staircase climbing the entire height of the three storey building. The entire place was designed reminiscent of a log cabin castle with beautiful wood panelling and balconies on every side.

That evening my father boasted of his brother's great success and they told me about his fine art collection, stocks and the company's international interests. His young girlfriend gave me a massage and taught me some french words by the stone fire place after we had eaten and drank a great feast. The next day we went riding through the winding mountain roads on his motorcycle. I remember we actually crashed into a ditch. I was thrown clear off the bike and landed easily, it was exciting but mu uncle got his leg stuck under the exhaust and was burned quite a bit.

When I was in high school, less than five years later, I worked at a used car sales lot for my uncle. He paid me cash by the car to do detailing and had all sorts of tricks on how to make these prices of junk sell. He was living alone in cheap motels and there were a few times he stayed in our families guest room. This didn't seem like too much trouble and it was nice to have him around but I kept getting scolded by my parents for stealing their alcohol which I hadn't. My uncle has since come in and out of our lives sporadically. Sometimes he's up and other times he's down. Although my father keeps in touch with him he often mentions regretting all the lent money and his other brother refuses to acknowledge him at all. At this point in the story, having already introduced the main topic, I don't think there is any need to explain what happened. I leave it to your imagination and intelligence to figure out how such  easily enjoyed extravagances ended in an empty bottle.

For each one page black and white comic in this series I have added a short story ( some fictional & some true) to challenge myself and investigate the concepts behind the drawings a bit further.