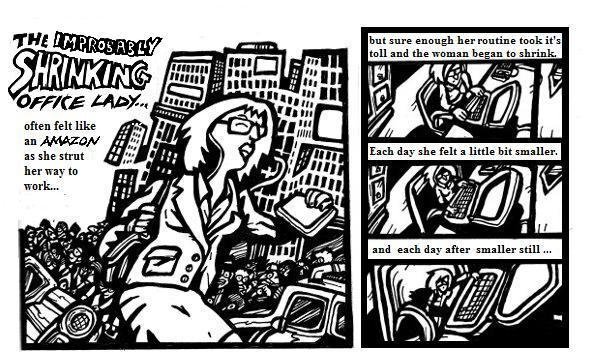 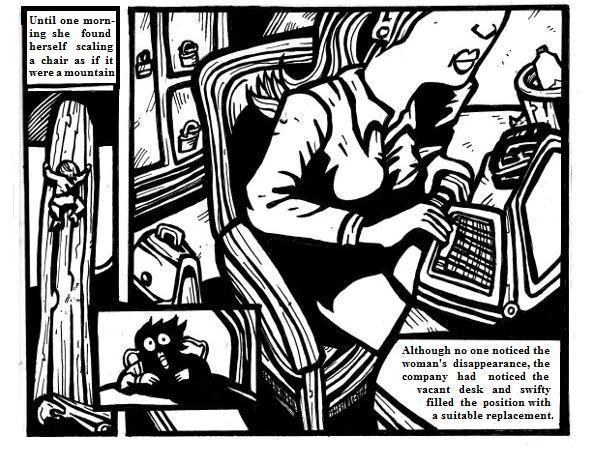 HEY APATHY! ALTERNATIVE COMICS STORIES: It was an easy life for young Ms. Soandso. She had graduated university with reasonable grades and equally reasonable ambitions. He polite manner and agreeable intellect quickly landed her a position at a reputable company. She was given a reasonably sized office and a set of daily tasks and had settled into a routine existence with the greatest of ease. At a reasonably young age she was all set to enjoy a reasonable life.

Her days went by smoothly as she stuck to preplanned schedule ensuring both healthy home habits and perpetual punctuality at the office. Her morning meals, though there was some variety depending on the day of the week, never changed. Every Monday was eggs and toast, while Tuesdays were oatmeal and yogurt and so on. She always cleaned up before leaving and left the kitchen in a state ready for diner. Again her evening meals ran in a similar fashion as the breakfast and she saved the weekends for variation, the occasional restaurant or what not.

Similar to everything else in her repetitive existence, her commute to and from work never changed. She'd put on her head phones and walk 10 minutes to the station and catch the 7:35 am train every single morning. This would bring her to the office district by 8:05 pm and drop her her off another 10 minute walk from her place of business. This granted her an extra 30 minutes which she spent at her regular cafe reading her favourite columnist in the dailies or a fashion magazine.

For the most part this routine went off without a hitch as long as there were no troubles with the trains. In those instances she had prepared a back up and would immediately hail a taxi and justify the extra expenditure by keeping her time. In fact, though no one ever really noticed, the train failed at almost regular intervals. The problems were few and far between but there was a certain cosmic equation that a mathematical wizard could easily deduce so these interruptions to her schedule were really just a part of the routine.

The office day was the same. This went up and things went down and things always went on. The same people, the same jobs, the same lunch break and the same afternoons. It was an easy life especially if you knew how to go with the flow. Smile, type and collect your pay. Not unlike the mathematical mystery behind the train malfunctions, the fluctuations of people, places and proposals in the office also became routine.

The trip home was not unlike the morning commute. Headphones blasting the latest tunes she'd simply reverse the early trip without the cafe. She headed straight home always excited to eat a fine dinner, do a little time on the exercise machine, watch a trashy program or read a trashy novel. To some extent the only thing that every changed was the title of these shows, books and the music in her headphones but really there was little difference in the content even after numerous years.

Finally the clock would strike 11 pm and she'd prepare to go to bed. Routine hygiene, getting the clothes ready for the morning and charging up the portable devices. If it was nearing the weekend she would get her laundry ready, check the theatre and restaurants reviews and decide on some frivolous purchases. If it was nearing the holidays she'd read up on resorts. Aside from the slight daily and seasonal variations nothing really changed and 11:30 pm she would check the locks and lights in her apartment before falling asleep.

Then one day she didn't wake up.

READ ALTERNATIVE COMICS FROM THE BEGINNING