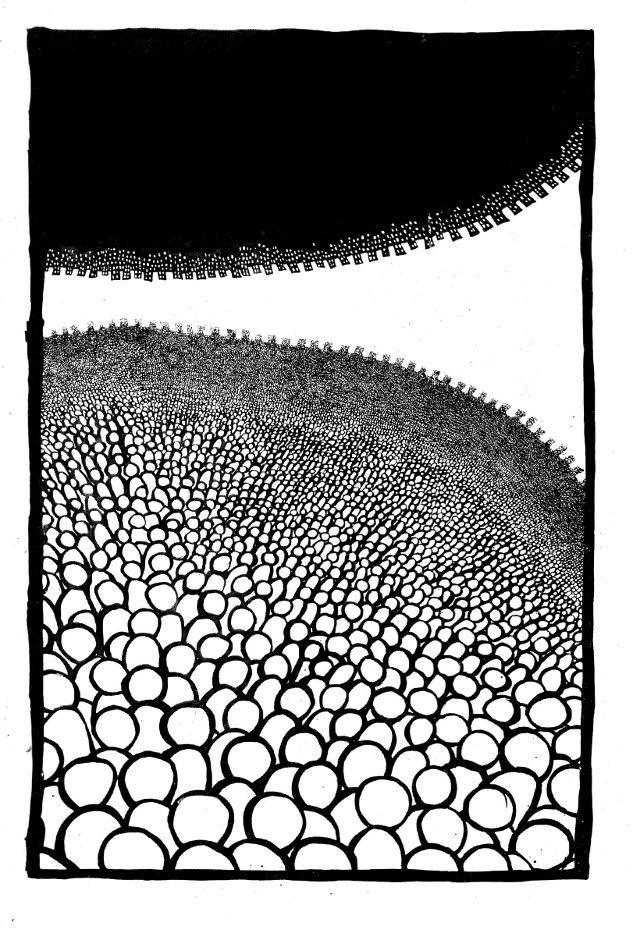 The City of Gears "A Factory Horizon"

Canadian Artwork Under a black machine sky hordes of faceless denizens march endlessly in oblivion. Like little cogs or the cells of a single organism the peoples move in uniform routine cycling themselves into the distance making the city spin. On the horizon we can see the individual characters vanish as they come together to form the skyline. Here the people become the buildings and the buildings become the gears. Above these lost little people the metamorphosis is reflected in the dark skies. Like some extraterrestrial force the giant black cog wheel moves in unison with the rotating crowds below, the entire scene acting as one monstrous amalgamation, moving towards a solitary ideal.

“The Factory Horizon” is one of the most intricate and detailed drawings in this City of Gears collection. The original work was drawn with black India ink using a hand carved bamboo quill pen. I made all the large works in this series with the crude wooden tool. I really like the pen because it precise enough to control but had an unpredictable nature to it which I used to develop a spontaneous style in my strokes. This spontaneity was particularly important to me because the works were so rigid and repetitive but I wanted them to have an organic feel. I also took pride in carving my own pens which in some inexplicable way added a sort of magic to the drawings. This drawing was approximately 6 feet x 8 feet and took about three days (25-30 hours) to complete.

This drawing was originally exhibited at the O.C.A.D. atrium gallery in Jan 2002. The complete exhibition included over 300 small pen artworks a series of animation loops, the debut of my first graphic novel “The Last Optimist” and 13 large scale ink drawing and murals. Following the first exhibition the “Factory of Gears” was showcased at the Toronto Outdoor Art Show in the summer of 2002 were it was purchased by a private collector. A few years later the work was loaned to the Cambridge Galleries and featured in a retrospective exhibition of my early larger works.