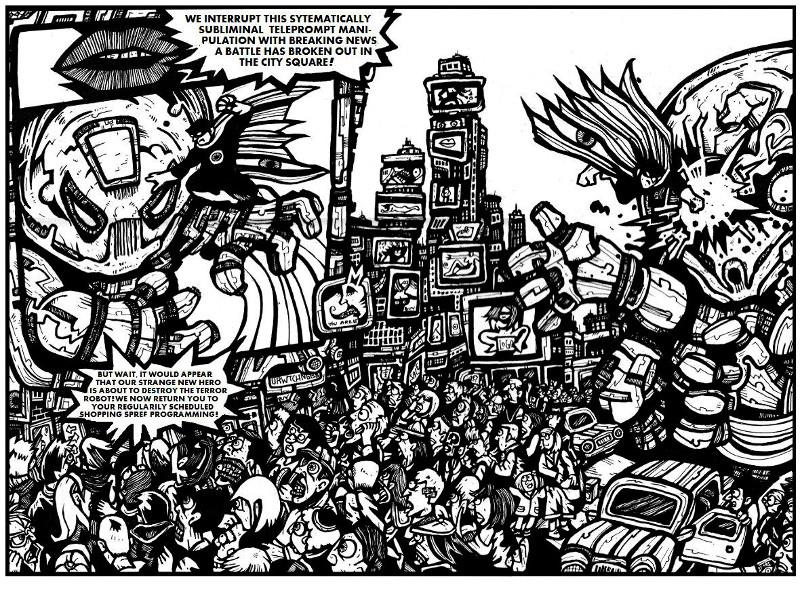 URBAN ARTWORKS: A SUPERHERO IN THE ALLEY

Urban Artworks Superhero Stories! Lying amongst the cans and spilt litter of a main street alley the superhero watches the city strolling by. People are scuffling here and there all around him, shopping, eating, laughing and working. The traffic is heavy but flowing and everyone is too busy to care for what appears to be a homeless squatting in the filth. He barely even bothers to conceal his cape and costume although his clothes were pretty scuffed up from the previous evenings battle any way. The damage is mostly superficial but sufficient to add to his current disguise as he take a few moments to rest and ponder the situation.

Directly across the street from his hiding place is an electronics store. The front window is filled with the latest television sets and they are all tuned into the news station recapping last nights event. “Once again this strange new superhero with an eyeball insignia saved the city from a giant Robot attack! It has been the 6th such encounter in the past few months and authorities are still stumped as to where the Robots are coming from, why they are targeting our city and ultimately what is their purpose. Equally as controversial is the appearance of the super hero. Who is this masked man and where did he come from? Regardless, there is a general consensus of appreciation for this mysterious flying man as it is clear that he is helping keep the Robotic terrorism at bay...”

It isn't like that at all, thought the hero. The whole thing seems like a set up. He knows that the Robots aren't actually attacking the city but have been after him. Someone has created these giant electric warriors for the sole purpose of destroying the hero. The same questions run through his mind; Who? Why? Each new attack has been staged to call him out and they have all occurred within his vicinity regardless of where he travels in the city. Someone is tracking and using him to create these semi-fictional episodes. Of course it is also clear that he must intervene. Although there is little doubt that he is the true target, he realizes that the Robots are capable of causing real damage if he doesn't play his part.