SURREAL ARTISTS "THE CITY OF GEARS" 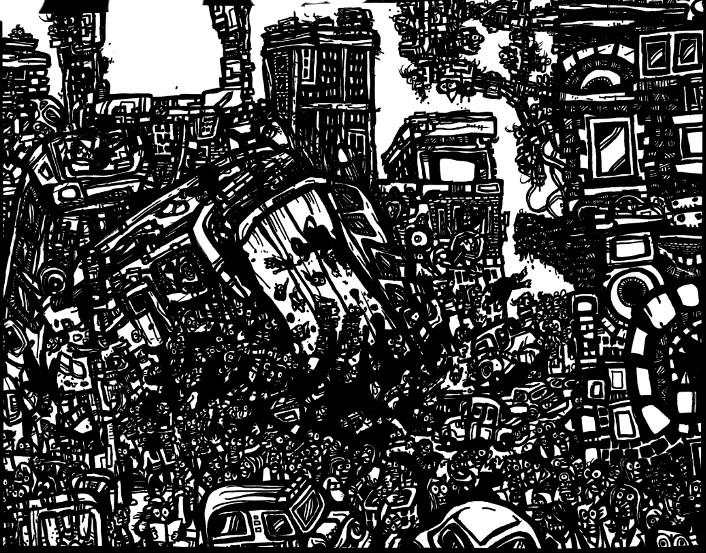 Surreal Artists Mike Parsons' City of Gears! To and from, back and forth, over and over and over again, the cars, buses trains and people spin around in circles never stopping but never really going anywhere. The routines feel productive, lining our pockets and filling our time but from a different perspective the movement may appear wasteful or nonsensical at the best of times. Built of brick, metal and mortar the buildings stand still and tall. Monstrously unmovable, enormous and wise the towering architecture takes after the trees. The giant structures prefer to bare witness than partake while they house our chaotic activities they are little affected.

As the years roll by people come and go leaving a little damage here and there but no mark of true significance. Even as new towers replace some of the old the buildings only seem to grow more powerful and taller each time. The old buildings offer little resistance knowing they've enjoyed their life more than most humans ever will. Their windows are their eyes, the entrances their mouths, with metal skeletons, concrete flesh and electric minds the city is alive, only it moves at a different pace.

Watching out onto the vascular roads and the walkways the buildings are amused by the mad scramble they see. All these self absorbed little blood cells who last but a moment are nothing much more than tools for the gear. For all their hopes, dreams and desires will amount to little more than the construction of another enormous tower before they pass away. Today is a lucky day for the buildings as they watch a ridiculous accident. Somehow the subway has surfaced crashing up through the streets. It happens from time to time that the vehicles get aggravated and cause a ruckus, and the buildings always take pleasure in watching any change to the routine.

“The City of Gears” is a collection of detailed pen and ink drawings dealing with a number of surreal urban myths. In this image I wanted to represent the architecture and the vehicles as characters in the city. On the right hand side the building has many tribal styled faces hidden in the brick works. On the left I drew a subway disaster scene in which the train has surfaced from below like a giant worm escaping the earth. I made approximately 30 illustrations in this surreal artists  series and came up with weird little parables to accompany the images.