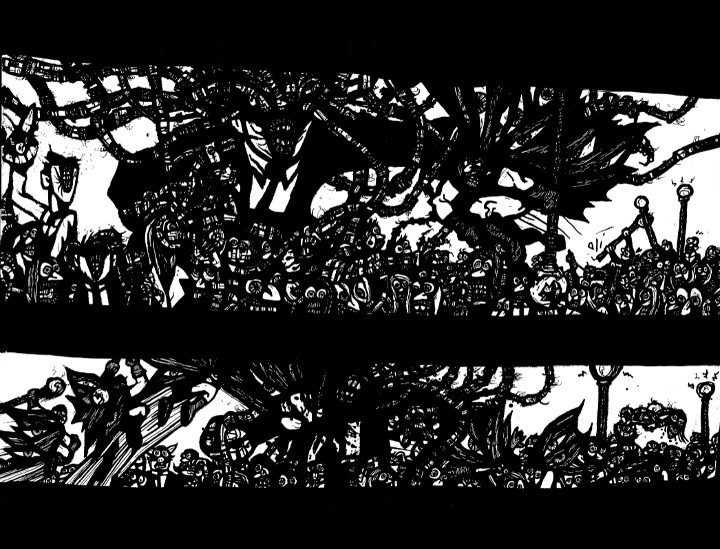 The ominous Robot Zombie business demigod continues to assimilate the citizens of the gear! Spouting technological tentacles from the top of his head and shooting wires from his finger tips the beast in able to invade almost every aspect of our lives. Corrupting our thoughts and manipulating our movements the demigod is determined to rule the city at any cost. Using subliminal messages flashing on video screens the villain can operate freely and no one ever seems to notice. As the mass media hypnosis grows more powerful with every purchase it appears that there is little hope left for mankind!

However despite this turmoil one tiny man with eyeballs on his cape continues to battle in hopes of maintaining a balance between man and machine. When one of the villains robotic tendrils try to assimilate this young business man his resistance caused an unprecedented transformation and a superhero was born! Drawing his strength from the collective unconscious, the superhero becomes the personified representation of human compassion, emotions, hopes and dreams. Determined to stand up against a cold world of conformity he dedicates his life to holding such treacherous forces at bay.

After tracking the wires for several hours the hero has discovered the location of this particular Electric Medusa. Flying into battle without a moments hesitation the hero grasps a lamp post as an improvised weapon. Tearing the pole from the concrete he raises it above his head and then with all his strength he impales the pole through the chest of the demigod. Had the creature a heart it would surely have been a goner but the hero knows that this opponent is only one of many. The enemy are far more dangerous than and difficult to defeat than this electronic minion. The enemy is an ideology that no hand to hand combat can harm, the hero must develop metaphysical techniques if he is to have any hopes for success...