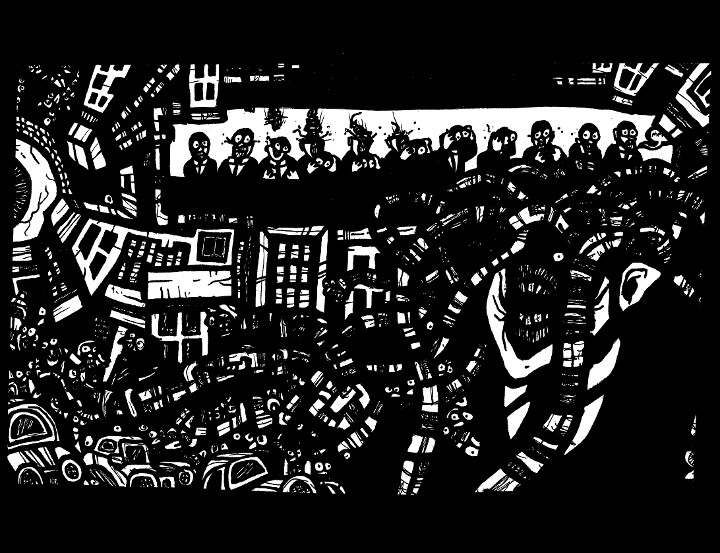 ATTACK OF THE TECHNOLOGICAL TENTACLES

Robot Monster Pen Drawing! Surreal technological tentacles are attacking the City of Gears! Slithering around our routines these weird electronic extraterrestrials are merging with the minds of the citizens tracking our movements and afflicting our conscious. The invasion is advertised on the giant blinking billboards boasting unknown pleasures for pennies depicting a young business person taking part in the assimilation. As one of the tendrils reaches down from the skies a strange force removes the top of his head. As of reflex he catches his cranium and replaces them back safely on top of his face. In that brief instance of vulnerability, separated from his mind and eyes, the robotic invaded slithers inside. The merging is complete and the young business man is now fully functional, barely away that any change has taken place.

A short distance away a business demigod watches the events on the screen unfold as they are reflected by commercial success in streets. Just like in the advertisements people rush all around purchasing these mechanical monstrosities and implanting they into themselves. Of course it is never quite as aesthetically pleasing as it looks on the screens but the books and the bank notes made up for the view. The onlooker himself is an extraordinary example as he has forsaken the top half of his human head. Instead of replacing the piece after the absorption, this would be general chose the cyborg tendrils over his old mind. Resembling a metallic Medusa this CEO of the invasion expels these robots directly from his face, perpetually sending them out in all directions as he laughs at the hypnotic powers he has produced.

The “City of Gears & the Technological Tentacles” is a pen drawing from a series of detailed illustrations dealing with the concept of electronic devices as an extraterrestrial force. Each drawing has a story as a part of this unusual mythology involving alien robotics, superheroes and giant eyeballs. The tale examines the evolution of humanity as we merge with mechanics in order to emphasize the necessity of balance and highlight the futuristic weirdness of the world we live in today. There were approximately 30 drawings in the series ranging from 11” x 14” to 30” x 40” as well as a graphic novel and numerous street art performances based on these ideas. Canadian Art by Mike Parsons 2005-06